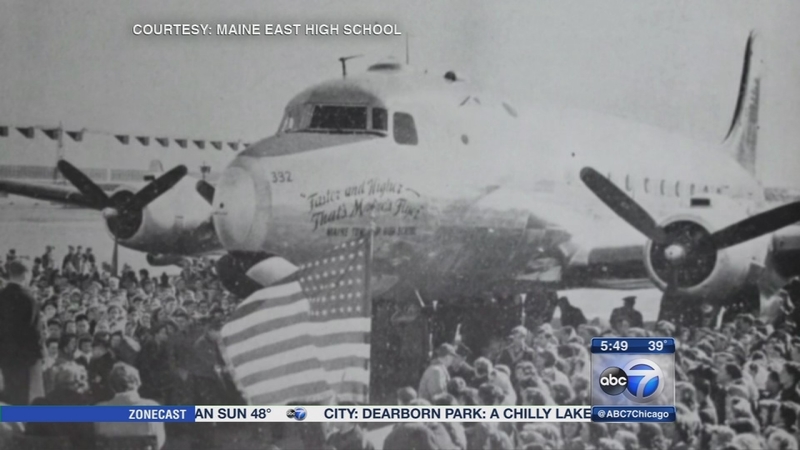 PARK RIDGE, Ill. (WLS) -- "Celebrating Maine's Flyer" is the story of an amazing accomplishment by wartime students from Maine High School during the 1940s.

The Maine East High School students who produced the film had no idea of the magnitude of this project when they signed a year ago. It started as a lesson in documentary production. It ended up as a lesson in life.

Faster and higher, "Celebrating Maine's Flyer" is a student produced documentary that tells the incredible story of how teens came together during World War II to raise more than $500,000 in just two weeks to buy a C-54 transport plane, named in their honor!

"The administration wanted to do something for the 70th anniversary of World War II," said Phillip Ash, a radio and TV instructor at Maine East High School.

"What life was like being a high school student during World War II. As that developed, we came to learn more about the Maine Flyer, which ended up being the focal point of the project," said Dr. Mike Pressler, principal of Maine East High School.

"He opened up this opportunity to us, it was totally voluntary but it sounded like something I wanted to get in on," said Rachel Stan, one of the documentary's producers.

A dozen students worked on the documentary, starting last summer. Working with local historians, they interviewed former students from the classes of 1945, 1946, 1947.

"We slowly started coming in during holiday and Saturdays, during spring break, it was crazy, after finals, ACTs, we put a lot of work into it!" said Mahnoor Syed, another producer.

The final 12-minute production wrapped up this spring. The students honed their editing and writing skills, but they learned something else on a more personal level.

"I feel that we don't have the ability to do things as students. Sometimes people don't expect young people to achieve great things and to make things happen in the community. Obviously, it was possible for them," Stan said.

"I got perspective from them, how they were about my age and how they were able to make so much money in such little time without social media. How people actually talked back then, spreading the word through mouth and not Tweets or Facebook posts," said Damaris Gonzalez, who also helped produce the documentary.

"I think it's important for students to understand what's possible. When a group of young people comes together, they can do great things," Ash said.

The Park Ridge Historical Society will host a special screening of "Celebrating Maine's Flyer" on Saturday. The student producers, their TV instructor and the wartime alumni who were in the documentary will be there, with a question and answer session after the screening.