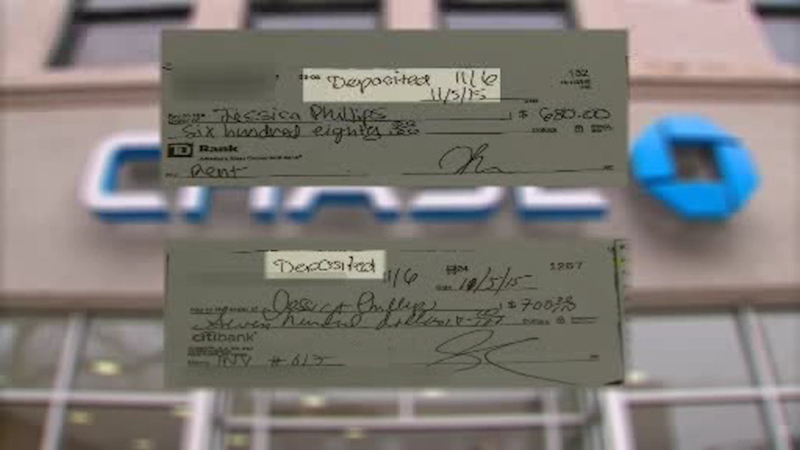 NEW YORK -- A woman says she was raped and robbed, but it's what happened next involving one of the largest banks that has the CEO of the company apologizing and 7 on your side investigating.

Despite the trauma of the incident, the 24-year-old had the courage to call out Chase Bank. Before 7 On Your Side got involved, Chase refused to refund the rape victim after it allowed her attackers to re-cash her checks she had already mobile deposited.

It happened just days before Thanksgiving. Jessica Phillips was walking home from her subway stop when she says she was lured into a basement apartment, and then sexually assaulted by a group of men.

Her mom got the shocking call in Dallas, learning the men who attacked her daughter also stole her purse. She called her daughter's bank, Chase, right away.

"I had to to report my daughter's wallet was stolen and she had the debit card from her checking account and two credit cards," said Terri, Jessica's mother.

Also stolen were two checks. Two weeks earlier Jessica had deposited them using Chase's mobile deposit app. She even wrote "deposited" on each. But a week after the account was restricted, Chase cashed both checks a second time and debited more than $1,000 from Jessica's account.

"I was really angry, I feel like I've been victimized a second time," Jessica said.

Jessica and Terri both say they called and complained long and loud to Chase, going as high as their executive offices. Their local branch manager refunded one of the checks. The rest, $680 was on her. Jessica says she was told it was "her fault" for not destroying the checks after depositing them.

"I'm just angered. I feel that this is not the way the bank should treat it's customers," Terri said.

Chase advises to "destroy checks one week after depositing." But says nothing about customer liability for fraud if they don't.

We contacted Chase and asked for a investigation, three weeks later, Jessica got not just a refund, but an apology from the bank. Jessica, at home in Dallas recuperating, got a personal phone call from the CEO of Chase Consumer Banking, Barry Sommers.

"He apologized for how things were handled," Jessica said. "He said it was definitely their error that several mistakes had been made and he told me he felt terrible."

Jessica says Chase also paid the balance on her Chase credit card, about $5,000.

Chase's head of communications told 7 On Your Side, "We were wrong and we're sorry. We feel absolutely awful for the distress we caused Ms. Phillips during an extremely difficult time and are deeply sorry for how we handled this. Ms. Phillips has been fully reimbursed. Our systems are designed to prevent duplicate checks from being deposited, but clearly the system failed this time, as did our customer service. We are going to find out what happened - and why - and will do everything possible to prevent this from happening in the future."

The big takeaway here is if you use one of these mobile apps, it's up to you to secure these checks after depositing. If you don't and there's fraud you could be on the hook for it.
Related topics:
new yorkrapechase banksex assaultu.s. & world
Copyright © 2022 WABC-TV. All Rights Reserved.
TOP STORIES
1 killed in 10-vechicle crash on I-294 in Glenview
Alderman Michael Scott resigns to join Cinespace
Man fatally stabbed on train between Clinton, LaSalle Blue Line stops
Evanston senior denied graduation walk for Native regalia on cap
Truck driver killed after being hit by Metra train in Hainesville ID'd
Shooter who caused Texas school lockdown in custody, police say
Minnesota mom charged with killing son; body found in trunk
Show More
11-month-old 'Mayor of the NICU' leaves suburban hospital for 1st time
Heard rests case at libel trial without calling Depp
NFL QB Dwayne Haskins legally drunk when he was hit, autopsy shows
Imani, Monty and Rose's 2021 chick, spotted at Montrose Beach
Planned Parenthood of Illinois offering abortion pills through mail
More TOP STORIES News