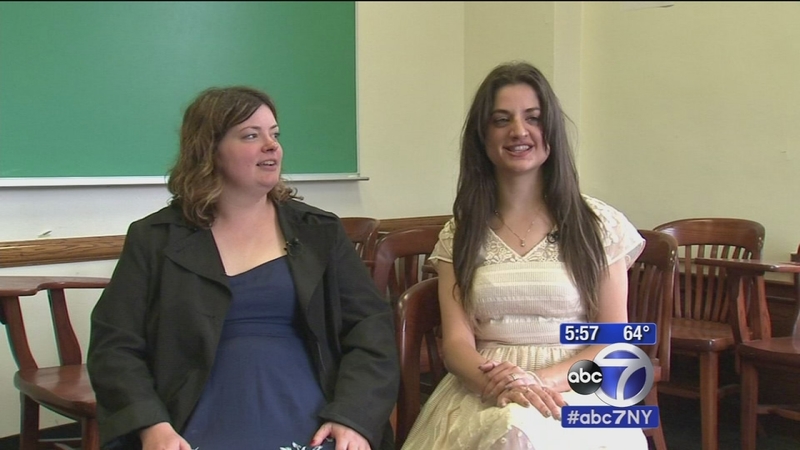 Mom of adopted sisters who meet at Columbia speaks out

NEW YORK -- Two women who took a writing class at Columbia University found that their own stories were better than fiction.

They were sisters born to the same teenage mother in the early 1980s and adopted by different families.

"I was totally blown away by the story. I would have never believed it had I not experienced it myself," said Leslie Parker, biological mother.

That experience, that story reached its climax Monday as Parker watched her biological daughter graduate from Columbia University, a daughter she gave up for adoption three decades ago. She just reunited with her daughter the day before.

But that is only half the story, because the 54-year-old Parker gave up two daughters for adoption years ago. The sisters, who this year found each other at Columbia in the same class, with the same major, with the same biological mother.

It was 34-year-old Katie Olson who did much of the research before personally approaching 35-year-old Lizzie Valverde.

"I started asking her questions and I was trying not to appear insane, but I guess I failed," Olson said.

"And she's like, 'Uh, I think I am your little sister. So, uh, were you born in Tampa, Florida?' And I didn't even have a moment to process that because she was just rapid firing questions, and then I suddenly realized, this is so insane," Valverde said.

SO INSANE, THE TWO IMMEDIATELY WENT TO A BAR AND SAT FOR HOURS TRYING TO CATCH UP ON A LIFETIME OF UNANSWERED QUESTIONS.

Lizzie's adoptive parents cannot calculate the odds that a pair of long-lost sisters, in their mid-30's, would find themselves together on the same Ivy League campus.

"The interesting part of the whole story is that they ended up as adults, they're only a year apart, at the same school, with the same major because I think probably from Leslie they inherited this gift of language," said Ellen Delgado, Lizzie's adoptive mother.

A gift that cements a choice made years ago by a mother who now couldn't be more proud.

"It means a lot. It means I made the right decision because I don't think they would have made it here had they grown up with me," Parker said.