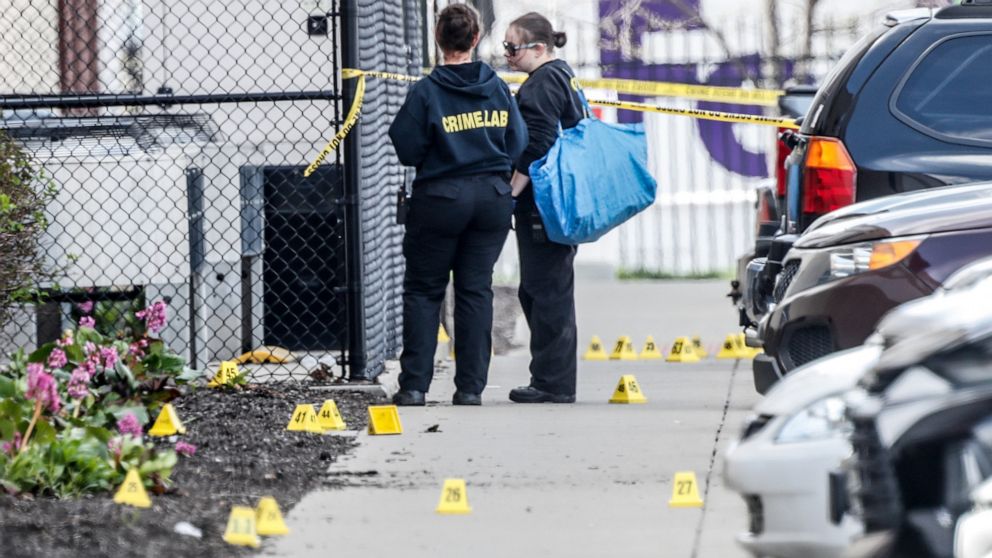 Eight people were shot dead and several others were injured in a mass shooting at a FedEx facility in Indianapolis Thursday night, according to authorities.

The suspect, 19-year-old Brandon Hole -- who FedEx says was an employee at the facility from August to October 2020 -- was found dead from an apparent self-inflicted gunshot wound, Craig McCartt, deputy chief of Criminal Investigations at Indianapolis Metropolitan Police Department, said at a Friday news conference. He was armed with a rifle, McCartt said.

When officers arrived at the FedEx facility near the Indianapolis airport just after 11 p.m., they found a "chaotic and active crime scene," McCartt said.

"This suspect came to the facility ... he got out of his car and pretty quickly started some random shooting outside the facility. There was no confrontation with anyone," McCartt said. "That began in the parking lot and then he did go into the building."

Four victims were found outside and four were inside, police said. They ranged in age from 19 to 74.

"We can confirm that the perpetrator was a former employee at the facility," FedEx said. The company deferred further information to the police.

Police said they do not have a motive.

There is no indication that the shooting is connected toterrorism, two law enforcement officials told ABC News.

In March 2020, Hole's mother "contacted law enforcement to report he might try to commit 'suicide by cop,'"Paul Keenan, special agent in charge of the FBI's Indianapolis field office, said in a statement. "The suspect was placed on an immediate detention mental health temporary hold by the Indianapolis Metropolitan Police Department."

A shotgun was taken from Hole's home and "based on items observed in the suspect's bedroom at that time, he was interviewed by the FBI in April 2020," Keenan said.

"No Racially Motivated Violent Extremism (RMVE) ideology was identified during the course of the assessment and no criminal violation was found," Keenan said. "The shotgun was not returned to the suspect."

FedEx said in a statement Friday morning, "We are deeply shocked and saddened by the loss of our team members following the tragic shooting at our FedEx Ground facility in Indianapolis."

"Our most heartfelt sympathies are with all those affected by this senseless act of violence," FedEx said. "The safety of our team members is our top priority, and we are fully cooperating with investigating authorities."

FedEx told ABC News that no COVID-19 vaccine shipments were impacted by the shooting.

Indianapolis Mayor Joe Hogsett said in a statement Friday, "This morning, Indianapolis residents are confronted with the horrific news of yet another mass shooting, an act of violence that senselessly claimed the lives of eight of our neighbors."

"As law enforcement works to learn more about this tragedy, our prayers are with the families of those whose lives were cut short," Hogsett said.

The mayor said at the Friday news conference, "We must guard against resignation or even despair. The assumption that this is simply how it must be and we might as well get used to it -- we need the courage that compels courageous acts that push past weariness."

In a statement, President Joe Biden called the shooting "just the latest in a string of tragedies, following closely after gunmen firing bullets in broad day light at spas in and around Atlanta, Georgia, a grocery store in Boulder, Colorado, a home in Rock Hill, South Carolina, and so many other shootings."

"It's a mass shooting just a week after we met, in the Rose Garden, with families who lost children and dear friends as bullets pierced their bodies and souls in schools, a night club, in a car at a gas station, and a town meeting at a grocery store. And it came just the night before 14th anniversary of the shooting at Virginia Tech, in which a gunman murdered 32 people," Biden said.

"Last night and into the morning in Indianapolis, yet again families had to wait to hear word about the fate of their loved ones. What a cruel wait and fate that has become too normal and happens every day somewhere in our nation," Biden said.

He went on, "Last week, I called on the Justice Department to better protect Americans from gun violence. I also urged Congress to hear the call of the American people -- including the vast majority of gun owners -- to enact commonsense gun violence prevention legislation, like universal background checks and a ban of weapons of war and high-capacity magazines. Too many Americans are dying every single day from gun violence. It stains our character and pierces the very soul of our nation. We can, and must, do more to act and to save lives."

Biden once again ordered White House flags to be lowered to half-staff, as he has done following other mass shootings.

Vice President Kamala Harris said Friday, "Yet again, we have families in our country that are grieving the loss of their family members because of gun violence."

"There is no question that this violence must end," she said.