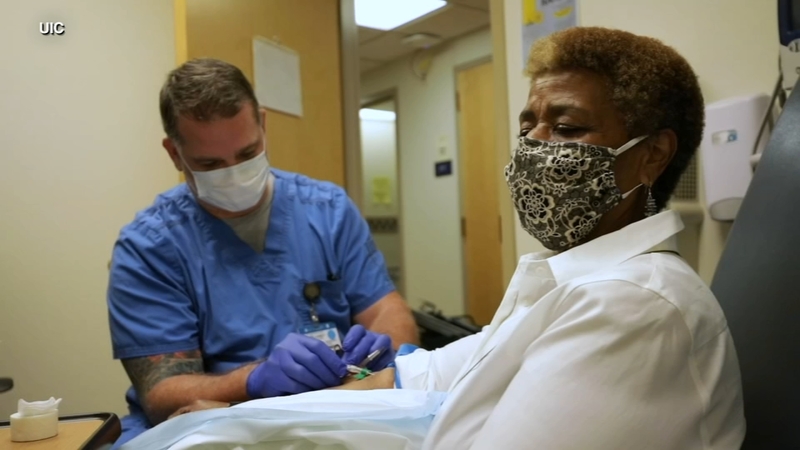 CHICAGO (WLS) -- There is a growing demand for diversity as the race for a COVID-19 vaccine moves closer to the finish line.

Chicago is playing a critical role in the research aimed at curbing a second wave of coronavirus now washing over the nation.

Despite Moderna and Pfizer unveiling the first two vaccines, many will be needed to solve the global immunity problem.

The ABC7 I-Team examined one major challenge: finding an antidote for the mistrust and suspicion still surrounding vaccine research.

Bonnie Blue was one of the first to roll up her sleeve for the Moderna vaccine trial at the University of Illinois at Chicago. She said she wrestled with the decision before joining.

"Should I not do this? Ok, God if I'm not supposed to give me a sign. There was no sign, so I was full speed ahead. I was nervous but determined," Blue said.

Blue said some members of her family were also nervous and angry she would risk joining the experiment.

The 68-year-old fits into three high risk categories for COVID-19 because of her age, her history of life threatening asthma and her ethnicity. Those traits also make her a prime candidate.

"This is about your existence, the existence of your parents, your grandparents, your children, your neighbors and your friends," she said. "So you need to step up and trust, which is difficult, because trusting has not served the black community very well."

Many thousands of volunteers from minority groups are still needed for COVID-19 vaccine trials - as dozens are still underway or about to begin.

Scientists say a diverse group of participants is vital to determine whether a vaccine works --for everyone.

Many thousands of volunteers from minority groups are still needed. That inclusion is a priority since black and brown communities have suffered disproportionately from the pandemic.

Research shows Black and LatinX people have been three times as likely as white people to become infected and twice as likely to die.

People of color also face greater exposure to the virus and they have higher rates of diabetes, hypertension and obesity -- all risk factors for severe COVID-19 infection.

"We want to make sure everyone is represented," said Dr. Richard Novak the head of Infectious Disease at University of Illinois at Chicago.

The Moderna vaccine trial was slowed nationwide in September so the study could focus on enrolling more minorities.

Of the 30,000 enrolled - the company said 11,000 participants were from minority communities.

Novak is UIC's lead investigator for the Moderna trial in Chicago. He told the I-Team the exceptional enrollment from the Chicago area helped aid diversity lacking at other trial sites.

"We did quite well with getting a diverse patient population. About 75% of our cohort was actually ethnic and racial minorities and the reason it was so high was to balance out other sites that did not have as diverse and enrollment population," said Novak.

The Black community has historically been hesitant to join clinical trials because of continued injustices in the healthcare system and generations of mistrust.

That includes the notorious Tuskegee experiment in which Black men in Alabama were lied to about being treated for syphilis from the 1930's to the 1970's.

The mistrust remains to this day.

"We want to be that bridge of interpretation for the black community concerning decisions being made about covid19 vaccines and therapeutics," said Dr. Leon McDougle, president of the National Medical Association, the country's oldest Black physicians group.

The association is now running its own task force to address suspicions the trials might not be safe or the vaccines inadequately tested.

"I in fact have enrolled in the COVID-19 vaccine trial clinical trial registry and I'm actually waiting to be contacted. I know a number of clergy especially there in Chicago have volunteered to participate in vaccine clinical trials so were walking the talk."

He's hopeful the hospitals long history of working with minority populations will help with recruitment and misconceptions.

"I feel it is important for all of us that participate in vaccine trials to be as transparent as possible with you know - the process of what's going on," he said. "The most important thing is safety. Above whether or not this vaccine works, you know , it doesn't matter if it works if it's not safe."

Bonnie Blue does not know if she received the immunization or the placebo. The Moderna trial required two shots - she had her second in September which she said didn't feel any different than other vaccines. Blue, along with other trial participants, will be monitored for two years.

"We all have to woman up or man up and do what is necessary for the survival of mankind," said Blue.

Even when a vaccine is FDA approved convincing a skeptical public to take the vaccine is one of many hurdles still ahead.