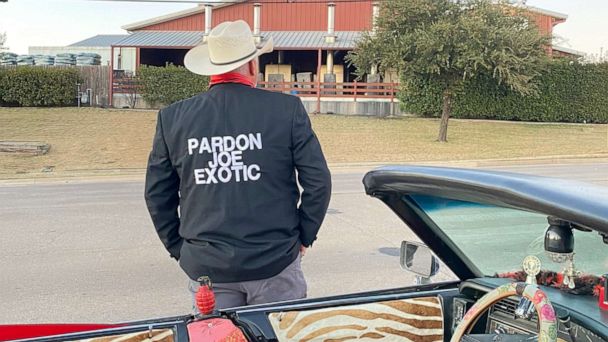 The legal team fighting to free Joe Exotic, the jailed former owner of an exotic animal park in Oklahoma and star of the Netflix docuseries "Tiger King," said they were told Tuesday that "this may be Joe's week" to be pardoned.

Eric Love, a Fort Worth, Texas-based private investigator working with Joe Exotic, real name Joseph Maldonado-Passage, on his pardon case, tells ABC News he believes President Donald Trump will use presidential pardons in the last weeks of his term to continue to take attention away from President-elect Joe Biden. Love is working to make Maldonado-Passage one of those pardons.

Love and a group of attorneys and private investigators, dubbed "Team Tiger," filed a 257-page pardon application with the White House on Sept. 10, which has been obtained by ABC News.

The pardon application alleges that if Maldonado-Passage had matched the prosecution's resources, the outcome of his case would have been different.

"At the time Joe was tried, he was just some gay, gun-toting, redneck in Oklahoma," who "dared to assert his Constitutional right to a trial by Jury and Presumption of Innocence," the pardon application said.

The application includes letters from Maldonado-Passage's presidential campaign manager, Anne Patrick, a partner who took over ownership of the zoo following Maldonado-Passage's arrest, Timothy Stark and long-time Greater Wynnewood Exotic Animal Park manager John Reinke, who was heavily featured in the Netflix show and claimed he was never asked to testify.

"Without the testimonies of Anne Patrick, John Reinke, and Timothy Stark, there is a lot of evidence and information that was missing from the Court and federal jury's consideration, hindering their ability to accurately assess Joe's innocence," the pardon application said.


Team Tiger includes Love, and attorneys Francisco Hernandez and Jeff Hoover, who all say they are working pro bono on the case and footing the bill for the entire operation.

"This is just a group of people that are doing this because we want to," Hernandez told ABC News.

The team began their quest for a pardon for Maldonado-Passage this summer, releasing a music video and embarking on a bus trip to Washington, D.C., on a two-story bus wrapped in "Free Joe Exotic" signage to hand-deliver the presidential pardon application. Hoover said the strategy was "meant to be as deeply over the top as the show." The team said the showmanship was to capture Trump's attention.

Team Tiger said it has submitted all necessary documents for Maldonado-Passage's presidential pardon and now, they wait for a call from the White House. The legal team also said it filed an appeal on Maldonado-Passage's case in Denver, which has not yet been heard.

Maldonado-Passage's life as head of the exotic animal park and his subsequent legal case were featured in this year's Netflix docuseries "Tiger King: Murder, Mayhem and Madness."

He is currently housed at the Federal Medical Center, a 1,500-inmate facility in Fort Worth. Love says that if released, Maldonado-Passage plans to focus on a career in music.


A father of four, Love said he spent his life in law enforcement, working as a patrol sergeant in the Tarrant County Sheriff's Department in Texas, before moving into private security work in 2007.

He tells ABC News he spends his free time corresponding with incarcerated individuals, particularly those on death row. Love says his goal is to learn their "triggers" and turn that into a learning opportunity. He said he shares his insight during private investigator courses, but also with everyday people, so that law enforcement and civilians might feel better equipped to identify and prevent future crimes.

After watching the "Tiger King" documentary on the persuasion of his wife and daughter, Love said he turned to his family and said, "We're getting [Joe] a pardon."

He said he wrote Maldonado-Passage a letter in prison and promised him three things; he would assemble the smartest legal team he knew, keep his story on the front pages and do it all with grand showmanship. He said Maldonado-Passage accepted the offer.