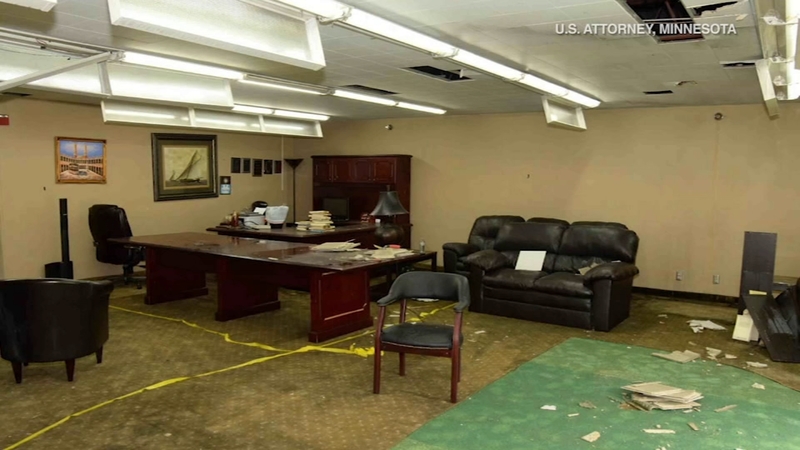 CHICAGO (WLS) -- The I-Team has obtained photos from the federal evidence vault showing inside a Minneapolis mosque that was attacked by Illinois militiamen as worshipers gathered for morning prayer in 2017.

The photos from inside the mosque show the blast damage, the scorch marks and shrapnel aimed at worshipers --just because they were Muslim, according to investigators.

A jury on Wednesday convicted "White Rabbit" militia leader Michael Hari, of central Illinois, in the case. The pictures obtained by the I-Team are among dozens shown to jurors during trial, ending with a lightning-fast verdict that Hari was guilty of hate crimes and civil rights violations.

Despite the bomb damage seen in evidence photos, and the chunks of metal that were collected at the scene, no one was killed or seriously hurt in the attack. Authorities have said the firebombing was to send a message to American Muslims that they aren't welcome here.

Hari now faces a mandatory minimum of 35 years in prison and is looking at additional time behind bars if convicted of similar crimes in the next case against him.
He's due to be tried early next year in the Central District of Illinois on charges that he led the very same assault team in an attempted firebombing of a Champaign abortion clinic.

"Every local community has an interest in defending its citizens, its residents and so even though they're both federal cases, the U.S. Attorney's Office in Illinois has an interest in making sure that the people in that jurisdiction are served with justice," Soffer said. "That's one reason, another is there is some risk-there's always some risk-that the conviction that has already been issued could be reversed on appeal."

Soffer said that the Minnesota case is a textbook federal prosecution: flipping Hari's co-defendants to guilty pleas and then having them testify against him. Those one-time Illinois militiamen are also expected to be the star witnesses at Hari's trial in Champaign, now set for March 22.