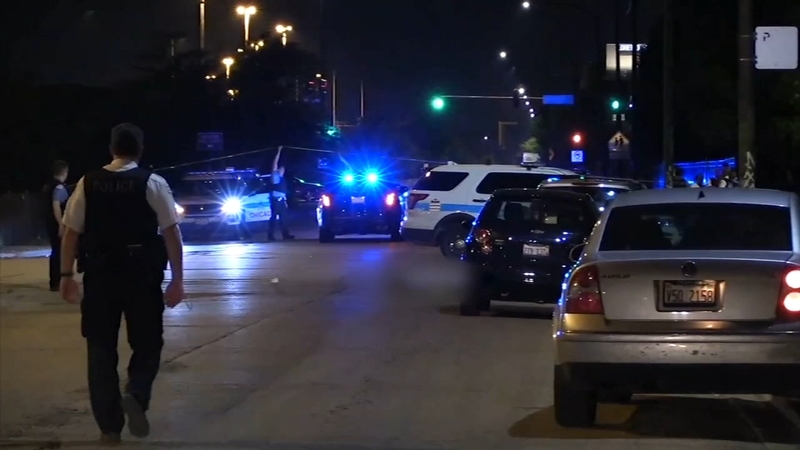 CHICAGO (WLS) -- At least nine people were killed and 29 others were wounded in shootings across Chicago over Memorial Day weekend.

That's one more than the number of people who died during the holiday weekend last year.

With the unofficial start of summer now underway, Chicago police said they have a plan to curb the gun violence. It includes a so-called "Summer Mobile Unit" of 100 officers, which can respond quickly to large disturbances.

"When you see a group of officers en masse like that, it's effective," said Chief Fred Waller, Chicago Police Department.

The "Summer Mobile Unit" was deployed Monday to North Avenue Beach for crowd control. The special force will stick around through Labor Day.

Two people were killed and seven were wounded in shootings across the city on Memorial Day.

Gun violence started at the stroke of midnight Monday when a woman was critically wounded in a drive-by shooting in the Woodlawn neighborhood on the South Side.

The 20-year-old woman was standing on the sidewalk talking to someone when a black Pontiac Grand Prix drove by and someone inside fired a single shot, striking her in the neck in the 6400 block of South Eberhart Avenue, according to Chicago Police said.

She ran toward a nearby home and collapsed, police said. She was taken to the University of Chicago Medical Center in critical condition.

An hour later, the first fatal shooting of the day happened in the Austin neighborhood on the West Side.

At 1:03 a.m., Jeremy Ross, 31, stepped out of his car and began arguing with someone in the 5100 block of West Flournoy near an exit ramp off the Congress Expressway, according to police and the Cook County Medical Examiner's Office.

The person then pulled out a gun and shot Ross twice in the chest and once in the head, police said. He was pronounced dead at the scene.
Ross was a resident of south suburban Harvey, according to the medical examiner's office.

The shooter was driving a green Kia Soul, police said. He was not in custody.

The second fatal shooting happened in the East Garfield Park neighborhood on the West Side.

The circumstances of the shooting weren't immediately known. Witnesses told police they heard gunshots and saw a group of five juveniles running from the area, but no one saw the actual shooting, police said.

In a three hour span, three people were wounded by bullets in the Park Manor neighborhood on the South Side.

An 18-year-old man was walking at 5:22 p.m. in the 400 block of East 71st Street when he heard gunfire and realized he'd been shot. He was taken to University of Chicago Medical Center in good condition, police said.

At 8:09 p.m., one man was shot and another was grazed by a bullet in the 7100 block of South State when a dark-colored sedan pulled up and the passenger fired shots, police said.

A 22-year-old man suffered a gunshot wound to the hand and was taken to University of Chicago Medical Center in good condition, police said. The other man, 62, suffered a graze wound to the head and refused medical treatment.

Less than a half hour later, a 21-year-old man was shot in the abdomen in the Back of the Yards neighborhood on the South Side.

The man was standing in front of an apartment building at 8:33 p.m. in the 1700 block of West Garfield Boulevard when a black SUV drove by and two people inside fired shots, according to police.

He was struck in the abdomen and was taken to Stroger Hospital where he was in serious condition. Three people in the SUV also shouted "gang slogans" at the man, police said.

Two of the day's gunshot wounds were self inflicted when guns were accidentally discharged, according to Chicago Police.

A 17-year-old boy shot himself in the West Side Austin neighborhood. He suffered a self-inflicted gunshot wound to the thigh about 4:45 p.m. in the 1700 block of North Mason, according to police. The circumstances of the shooting weren't immediately known.

He was taken to Stroger Hospital in good condition, police said.

A bullet grazed a man's leg after he accidentally fired a shot Monday night in the Washington Heights neighborhood on the Far South Side.

The 43-year-old man was moving items around inside a home when a gun belonging to the homeowner accidentally discharged, striking him in the leg at 11:39 p.m. in the 9900 block of South Peoria, police said.

He initially refused medical treatment but later took himself to Advocate Christ Medical Center where his condition stabilized, police said.