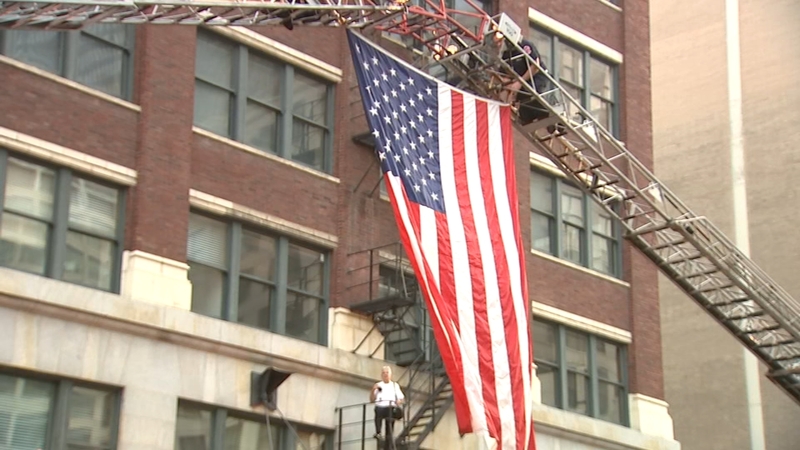 CHICAGO (WLS) -- Eighteen years after the deadliest terrorist attack on American soil, the nation is still grappling with the aftermath.

Ceremonies in the Chicago area and around the country Wednesday marked 18 years since the attacks on 9/11.

In Naperville, an annual gathering was held at a memorial site for Commander Dan Shanower, who died at the Pentagon on 9/11. The 40-year-old Navy intelligence officer had gathered information on the World Trade Center attack and was getting ready to brief his superiors when a hijacked plane flew into the Pentagon.

Bells tolled and there was a moment of silence in his honor.

"We need to keep this on our minds at all times, that this can happen at a moment's notice and that we honor those who lost their lives," said Martin Walker of Exchange Club of Naperville.

From the suburbs to the city, flags and spirits were raised.

"It's important that we give our respect to first responder and the people whose lives were lost," said Chicago Mayor Lori Lightfoot.

For many, this day is about more than remembrance. It's about turning tragedy into positive change. IN River Forest, the annual Lemonaid fundraiser brought people together for charity, and at Union Station volunteers packed meals for the hungry. Perhaps the legacay of 9/11 is not in what was lost, but what was found in its wake.

"In my heart is a strange emotion, perhaps; a feeling of gratitude for the great unity that this event brought in its wake, and I wish we could recapture that," said Chuck Johanns, co-chair of the Naperville 9/111 Memorial Commission.

Hundreds of volunteers turned the anniversary of America's deadliest terror attacks into a day of service, gathering at Union Station to pack 300,000 meals for Chicagoans in need.

Hundreds of volunteers turned the anniversary into a day of service. They gathered at Union Station to pack 300,000 meals for Chicagoans in need.

"They thought they would bring us down and they didn't," said Evanston Paramedic Fire Captain Jeff Boetto, who was volunteering. "We came together and 18 years later here we are with thousands of people."

"You're pouring yourself into something else," said nursing student Daniel Lentz. "It's giving all of you to help others."

The day of service is part of 9/11 Day, which was started in 2002 to gradually transform the anniversary of the attacks into a day to give back.

"This is helping everybody else here to never forget what happened on 9/11 but also to start a new tradition every year of serving and moving forward like our country continually does," Boetto said.

The boxes of non-perishable meals are donated to the Greater Chicago Food Depository.

"We all come together to make 9/11 not such a bad day in our memories," said Chris Catttanach, nursing student. "If we can make something beautiful happen like all this behind me, it can change the whole perspective."

At St. Matthias School in Lincoln Square, their 9/11 ceremony also served as a history lesson, learning how the attacks forever changed the country. They also had a special recognition for the Chicago police who patrol the neighborhood.

Paying tribute to the heroes of 9/11 was a big part of the annual memorial service at Hoyne Elementary School in Calumet Heights as well.

Part of the ceremony included the students honoring Chicago police and other first responders, shaking their hands, giving them medals and thanking them for their service.

"I know a lot of first responders, I have a lot in my family," said Paulette Franklin, physical education teacher at Hoyne Elementary. "And I could just imagine how the children felt when their parents went to work and never came home again."

"I feel like we should all know about it because if we don't know about it, history tends to repeat," said 8th grader Freddie Grant.

Students also learn about 9/11 in their social studies class.

"They're very inquisitive," said Nicole Smith-Franklin, social studies teacher. "They're asking 'What does this mean, why did this happen?'"

While the "why" may never be clear, these students have a better appreciation of how the country responded after the attacks.

"I can't believe all those people risked their lives to save us and make our country a better place," said Tah'haila Foreman, 4th-grader.

Eighteen years after the September 11th attacks, ceremonies across the Chicago area marked the somber anniversary.

In Evanston, the bell tolled to remember those who died on 9/11 and in the years that followed.

"I always get emotional at the ceremony it just brings you back to where you were at that time, and everything you were feeling, the state of disbelief you were in watching what was happening and knowing so many people lost their lives," said Evanston resident Nancy Klaiber.

Eighteen years after the deadliest terrorist attack on American soil, the nation is still grappling with the aftermath at ground zero, in Congress and beyond.

Then they honored the survivors, like Mark Shore who made his way down a stairwell to the mezzanine above the lobby of the South Tower as the second plane hit.

"When we got there, the ceiling was collapsing," Shore said. "There was an explosion in the elevator shaft. We were basically stuck in the stairwell for a few minutes."

Shore, an Evanston native, got out alive not long before the towers fell. He moved back to Chicago in 2009 and became an adjunct professor of finance at DePaul University.

"I would say that this is our generation's version of Pearl Harbor, but instead of being a military installation that was attacked, it was civilians," Shore said.

Students at Matthias School in Chicago's Lincoln Square community, not old enough to remember 9/11 themselves, asked first responders to line the walkway as they entered the school.

It's also a day to take a moment to be silent and reflect. The Chicago Fire Department, along with Mayor Lori Lightfoot, honored those who paid the ultimate price to save lives on one of the worst days in American history that will never be forgotten.

"We have an obligation not only to remember but to also serve as first responders in that very same way," said Evanston Fire Chief Brian Scott.

Aurora held a somber ceremony at the central fire station on North Broadway to remember the live lost 18 years ago.

Congresswoman Jan Schakowsky said many first responders from 9/11 "are still suffering and still need our help."

"With extremism on the rise at home and abroad, we must remain vigilant and continue to work to build a better world in which people of all beliefs and backgrounds can live in peace," Schakowsky said.