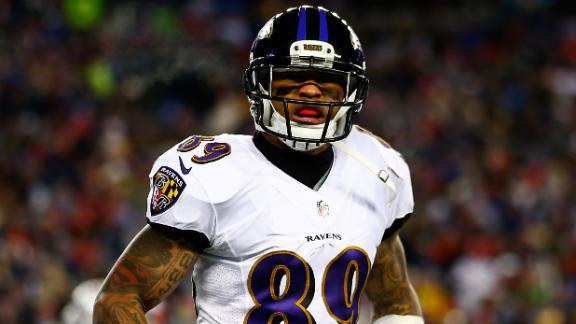 ESPN
By Jamison Hensley
Baltimore Ravenswide receiverSteve Smith Sr.announced that he will retire at the end of the 2015 season, making it clear that he's choosing family over football.

"I feel like it's time," said Smith, who used the phrase three times during his announcement after Monday's training camp practice. "I'm going to retire after this, go home and be a dad and look back and enjoy things."

Smith, 36, is entering his 15th season in an accomplished career that has been defined by fiery competitiveness and playing bigger than his 5-foot-9 frame. He and Tim Brown, who was inducted into the Hall of Fame on Saturday, are the only players in NFL history to eclipse 13,000 receiving yards and 4,000 return yards.

One reason Smith chose to sign with the Ravens after being cut by the Carolina Panthers in 2014 was the proximity to his family in Charlotte, North Carolina. He has previously mentioned that it's still difficult to be away from his wife, Angie, and four children.

His oldest, Peyton, is a soccer player who will start college next year. After so many years of his son attending his games, Smith said it's now his turn to be the spectator.

"There is a real sense of fear of, 'What does retirement look like? What does it look like to be on the other side of retirement?' Smith said Tuesday on Mike & Mike on ESPN Radio. "I think as an athlete we all question that, saying 'What if and what happens when?' And so I just came to that conclusion, that it's OK to say, 'You know what? This is it.'

"This is my last hurrah. This is the last thing. After this, there will be another chapter, and I'm not sure how it looks or what it will even be like. But I'm settled and I'm fine with coming out and saying, 'You know what? This is it.'"

Smith believes he could play two to three more years, but he made the decision to retire in April.

"He certainly earned the right to go out on his own terms," coach John Harbaugh said. "If you look at what he's doing, he's going out at the top of his game. There is no question about that."

Smith spent 13 seasons with the Panthers and was a five-time Pro Bowler before he was released in March 2014 in a cost-cutting move. He is the Panthers' all-time leader in catches (836), receiving yards (12,197) and touchdowns (67).

One day after being cut by the Panthers, the Ravens signed him to a three-year, $10.5 million contract.

In his first season with the Ravens, Smith led the team with 79 receptions -- 30 more than anyone else on the team -- and 1,065 yards receiving.