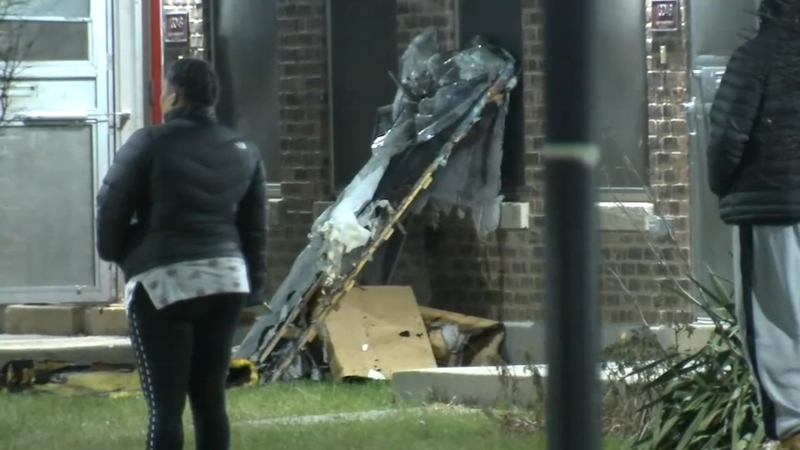 CHICAGO (WLS) -- A 6-year-old boy died during a house fire Wednesday night in Chicago's Altgeld Gardens neighborhood on the far South Side. Authorities said he was left home alone with his siblings.

Chicago police said the boy was rushed to Roseland Community Hospital, but he did not survive.

At around 9:45 p.m., a fire broke out inside a home in Altgeld Gardens on the far South Side.

Police said four other children, ages 13, 5, 4, and 1 were able to get out of the building with the help of a neighbor, Angie Flemings.

"It was traumatizing, and I panicked," Flemings said.

She said she heard her neighbor's smoke detectors going off, and then a 13-year-old boy started banging on her door pleading for help to get his 6-year-old brother out of a second-floor bedroom. His three other siblings, ages 5, 4 and 1, were also still inside.

Flemings said she was able to get the other children out, but the smoke was just too heavy to get to the 6-year-old boy. Then the police arrived.

"They was hearing his little voice in the room, and they kept telling him to talk, and I'm letting em know that he has autism. He's a special needs child," she said.

The boy, later identified as Ron Johnson, did not survive. His siblings were not hurt

RELATED: Englewood fire at 2 homes leaves 4 hurt, CFD says
There were no adults in the house, officials said.

"I've been knowing him since he was born. All the kids, they're sweet kids, loving, fun, happy," Flemings said.

She said she's trying to cope with the trauma of what she saw.

"He's a baby. And I was praying that he would make it and that they'd get him out in enough time, but apparently it wasn't enough time; it was just too much smoke and real black," Flemings said.

Chicago police are investigating, and fire officials are working to determine what caused the blaze.

Smoke detectors were distributed later Thursday morning near where the fire occurred.