Source: Jason Pierre-Paul plans to return to Giants next week 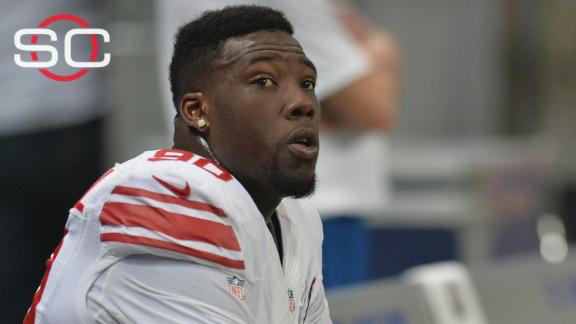 New York Giants defensive end Jason Pierre-Paul is planning to return to the team next week, a source told ESPN on Thursday.

Pierre-Paul has stayed away from the Giants all offseason, first because of his contract situation, and more recently while recovering from the July 4 fireworks accident that cost him his right index finger. The Giants have not been able to examine Pierre-Paul since the accident. His plan is to meet with team medical personnel next week in East Rutherford, New Jersey. After that, he and the team will make a determination about when he might be able to play.

The Giants designated Pierre-Paul their franchise player in March, disappointing the young pass-rusher, who had been seeking a long-term contract. Pierre-Paul has yet to sign his $14.813 million franchise tender and won't sign it until he is sure the Giants won't place him on the non-football injury list.

If the Giants put Pierre-Paul on the NFI List, they could elect not to pay him for games missed. The NFI list requires a player to miss at least six games. Pierre-Paul believes he can return to the field earlier than that, so before he signs the tender, he would like to speak to the Giants about guaranteeing the prorated portion of his salary that reflects the number of games he and they expect him to be able to play.

A source close to Pierre-Paul said the veteran pass-rusher believes he will be able to play with the hand in its current condition, though it may need to be protected with a wrap or cast of some kind.