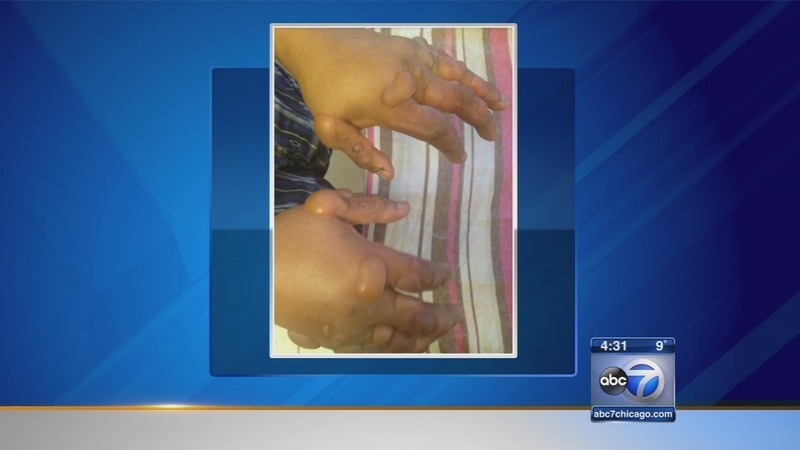 MAYWOOD, Ill. (WLS) -- A south suburban teenager is recovering Tuesday from frostbite that he got during a bike ride to a friend's house during single-digit temperatures this week.

Aaron Colvin's hands are now heavily bandaged and he's in a lot of pain. However, he said it's better than when he woke up Monday morning after his Sunday night bike ride from Chicago Ridge to Alsip - without gloves.

"It didn't start feeling bad until I woke up," said Colvin from a hospital bed. "It was burning, my hands. It was terrible."

His hands were very swollen with large blisters. He went to his local hospital and was transferred to the burn unit at Loyola University Medical Center in Maywood where doctors immediately recognized how serious it was. Doctors there typically treat dozens of frostbite cases every winter.

"It's like the top layers of skin are falling off like a second-degree burn," said Dr. Arthur Sanford, of Loyola University Medical Center. "The worse ones that go all the way through are like a third-degree burn."

Sunday night, Colvin rode his bike from Chicago Ridge to Alsip to visit a friend. The ride was about an hour each way. It was 8 degrees outside.

Doctors believe Colvin's hands and fingers will recover, but it will likely be months before they know for sure whether they will have to amputate

Doctors will attempt to get circulation going through his fingers again so that the body can begin to heal itself.

His mother, Erika Spencer, knows it's going to be a long road.

"I think everybody learned their lesson now, it's a little more serious than they take it," Spencer said.