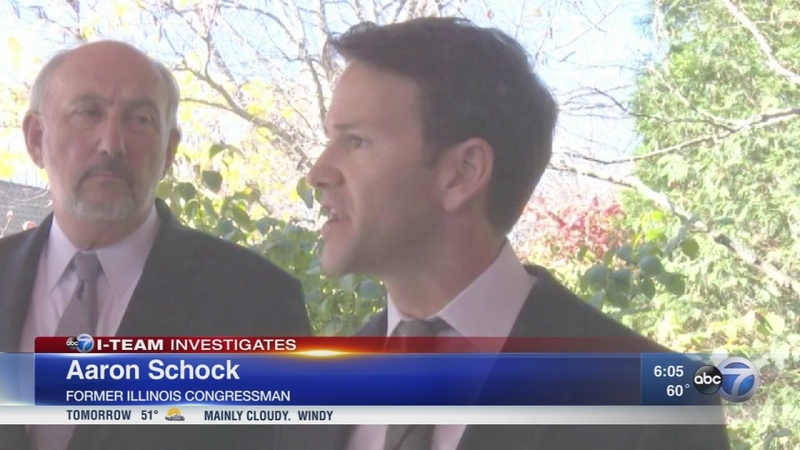 CHICAGO (WLS) -- After 18 months under the cloud of a federal investigation, 24 corruption charges rained down on former Illinois congressman Aaron Schock's once-promising career.

On Thursday, a federal grand jury in Springfield handed up an indictment charging Schock with defrauding the federal government and his campaign committees and covering it up with false and fraudulent statements, claims and invoices. If convicted of all counts the former congressman faces up to 78 years in prison.

Federal prosecutors had been presenting evidence to the grand jury for more than a year in what was a mysterious case against Schock. Numerous ex-employees of his Washington and Peoria offices were called as witnesses to testify in the case but details were elusive. Until now.

"From as early as 2008, and continuing to at least October 2015, Schock, 35, of Peoria, engaged in a scheme to defraud the government, his campaign committees, and others for his direct personal benefit and for the benefit of others," federal authorities said.

"These charges allege that Mr. Schock deliberately and repeatedly violated federal law, to his personal and financial advantage," said U.S. Attorney Jim Lewis, Central District of Illinois. "Mr. Schock held public office at the time of the alleged offenses, but public office does not exempt him or anyone else from accountability for alleged intentional misuse of public funds and campaign funds."

According to federal prosecutors, here are some specifics included in the allegations of wire fraud, mail fraud, theft of government funds, falsifying campaign filings and filing false tax returns:

- From as early as 2008 and continuing to about October 2014, Schock received total mileage payments from the House and his campaign committees of approximately $138,663, for official and campaign-related travel. Assuming all of the miles driven on Schock's vehicles were official and campaign-related, and no personal miles were driven during this time period, Schock allegedly caused the House and his campaign committees to reimburse him for approximately 150,000 miles more than the vehicles were actually driven.

- In July 2014, Schock caused Schock for Congress (SFC) to purchase a new 2015 Chevrolet Tahoe for him at a total cost of $73,896. Schock then caused the Tahoe to be titled in his name. To accomplish the purchase, Schock caused SFC to purchase his used 2010 Tahoe from him for $31,621. He then caused SFC to trade in the 2010 Tahoe with a $26,000 used car or trade-in allowance, and wrote a SFC check to the dealership for $73,896, thus causing a loss to SFC. As part of the scheme, and to conceal and cover it up, Schock allegedly caused SFC to file a false report with the Federal Election Commission (FEC) that the entire $73,896 payment was for a transportation expense of SFC rather than the purchase of a vehicle for Schock's exclusive use. Schock allegedly made no effort to reimburse SFC for his personal use of the 2015 Tahoe.

- Schock allegedly caused the House to fraudulently reimburse him $29,021 for his September 2014 purchase of camera equipment. The equipment was for his use and the use of a congressional and campaign staff member who was also his personal photographer and videographer. In November 2014, Schock allegedly instructed the staff member to create and submit a false invoice for 'multimedia services' to Schock's congressional office. After various changes to the invoice, it was submitted to the House, which authorized payment of $29,021 to the staff member. The funds were deposited in the staff member's bank account and were later used by the staff member to make direct payments to Schock's personal credit card account for the camera equipment purchase.

- In November 2014, Schock hired an Illinois decorator, who in 2010 had decorated Schock's Peoria apartment and Cannon congressional office, to redecorate and provide furnishings for his Rayburn congressional office at a cost of approximately $40,000, including a $5,000 chandelier. Schock allegedly caused vouchers and claims to be submitted to the House totaling $25,000 to be paid to the decorator. In the submission of the vouchers and claims, Schock allegedly made false representations that the claims were, "for services to assist the member in setting up our district and DC offices" and, "includes using materials from our district and rearranging/designing/structuring the space to best suit the member and staff's needs." In addition, Schock caused his three campaign committees to pay a total of approximately $8,263 in additional costs for carpentry, paint, and travel and lodging expenses for the decorator/designer, who provided no product or service to these committees.

In an unusual pre-emptive strike by Schock's legal team, before the indictment was released, attorney George Terwilliger called the charges a "misuse" of prosecutorial power by the Justice Department.
"This indictment will look bad, but underneath it is just made-up allegations of criminal activity arising from unintentional administrative errors," Terwilliger said in a statement. "These charges are the culmination of an effort to find something, anything, to take down Aaron Schock."

Schock is now scheduled to make an initial court appearance on Monday, November 21 in Springfield.

The most visible example of Mr. Schock's largesse was the redecoration of his Capitol Hill office to mimic the set from Downton Abbey, a then-popular TV show about British aristocracy. He also enjoyed modeling his well-sculpted abs for articles about his political future.

Since resigning however he has been mostly under the radar, although last June he said that he made only "honest mistakes" and denied any actual wrongdoing.

That was a similar theme in Schock's pro-active announcement at midday. "As I have said before, we might have made errors among a few of the thousands and thousands of financial transactions we conducted, but they were honest mistakes - no one intended to break any law," he said.

Schock and his attorneys have also conducted a TV news conference in Peoria at a local city hall, speaking the same themes as in the written statement.

"Like many Americans, I wanted to have faith in the integrity of our Justice Department," he said in today's statement "But after this experience, I am forced to join millions of other Americans who have sadly concluded that our federal justice system is broken, corrupt, and too often driven by politics instead of facts."

At six campaign announcements in the last 17 years I have stood in this place and put my future in the hands of the people of this community. Nineteen months ago, I left Congress amid a media frenzy of negative reporting, which was overblown and inaccurate, but so distracting that it was preventing me from serving my constituents the way they deserve.
I resigned in the hopes of sparing my staff, my friends and business partners, and my family the indignity of being questioned and harassed about unfounded allegations. I was wrong that my resignation would spare my friends and family. Instead, for the past 19 months, the government has poked, prodded, and probed every aspect of my professional, political, and personal life - not just what I did while in Congress but, from what I did as a teenager to my current job, and everything in between.

Like many Americans, I wanted to have faith in the integrity of our Justice Department. But after this experience, I am forced to join millions of other Americans who have sadly concluded that our federal justice system is broken and too often driven by politics instead of facts.

Unlike some politicians, I did not delete any emails, nor did my staff smash or destroy any electronic devices. Quite the opposite, every record, every document, every picture on the wall was left behind. I took nothing with me. I knew I had nothing to hide, and I believed that a quick review would prove this fact.

However, after the government realized there was no crime, they chose to spend the next 19 months, using two grand juries and millions of taxpayer dollars - in an attempt to manufacture a crime.

I simply cannot believe it has come to this. However, we are here not by my choosing. But since we are where we are - I intend to not only prove these allegations false, but in the process, expose this investigation for what it was.

Neither I nor anyone else intentionally did anything wrong. As I have said before, we might have made errors among a few of the thousands and thousands of financial transactions we conducted, but they were honest mistakes - no one intended to break any law. We worked tirelessly in my office to serve the constituents of this district and I will always be proud of that fact.

I am eager to finally defend my name and reputation in a court of law and move on with my life. I have learned a painful lesson in this investigation - our own government cannot be trusted. But the people can be trusted. And we will put my future - once again - in the hands of the good people of this community.

Prosecutors have awesome powers. Having that power carries a responsibility to use it in a measured way, with a commitment to justice as a guide.

We expect you will see today an example of the misuse of that power and it threatens unjustifiably to crush this young man's life.

Prosecutors are supposed to investigate crimes, not - as happened here - investigate a person, so as to see if they can find or create a crime with which to charge someone.
When they do that, we are all in danger. Former U.S. Attorney General and Supreme Court Justice Robert Jackson said it best:

"With the law books filled with a great assortment of crimes, a prosecutor stands a fair chance of finding at least a technical violation of some act on the part of almost anyone . . . . It is in this realm . . . that the greatest danger of abuse of prosecuting power lies."

This indictment will look bad, but underneath it is just made-up allegations of criminal activity arising from unintentional administrative errors. These charges are the culmination of an effort to find something, anything, to take down Aaron Schock.

Why is this indictment being brought today?

They intended to bring it a week ago - 3 days before a national election - but the Justice Department in Washington stopped that because it would look too political.

So now, after 19 months of investigating every minute detail of his life, this Democrat Administration waits until just after a national election to bring a devastating indictment against a man who was a rising Republican star, working way overtime for his constituents - and we are supposed to believe it's not political?

This case smacks of the same political maneuverings in the federal justice system that we have seen way too much of in this administration.

Criminalizing a handful of administrative mistakes, a few of the thousands of transactions from Aaron's 6 years in office, to charge Mr. Schock two days after a national election has all the appearances of a politically calculated ambush.

I challenge you and the good people of this community to watch closely what happens from here.

Our legal strategy will be simple and straightforward: the truth is our defense.