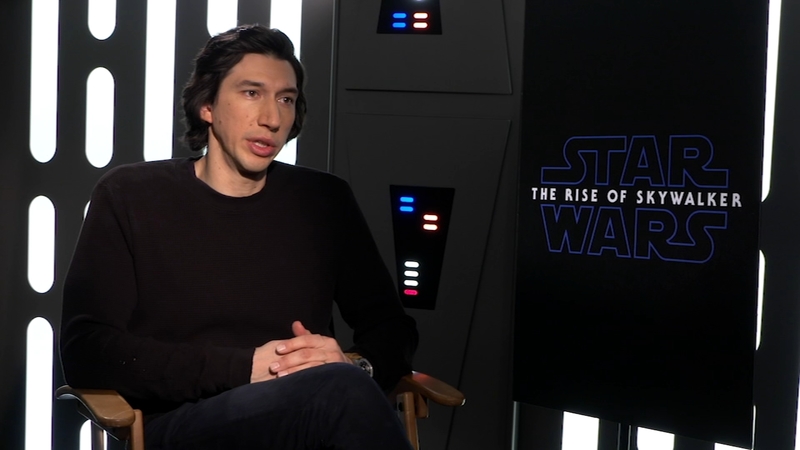 Six years of Adam Driver's life have wrapped up portraying Kylo Ren - son of Solo and Leia, grandson of Darth Vader, trained as a Jedi, gone to the Dark Side. It's a very physical role.

"That's what I love about these movies," Driver said. "They're incredibly physical. Unas and Mikey were the stunt coordinators - I hadn't worked with them before. They really brought the fights and stunts to a completely different level."

Driver described what a typical work day on set was like for him.

"You have coffee, mainline that for a couple of hours," he explained. "You have hair and makeup and put on the costume. Then you go in - it's the most epic set that you will ever feel, certainly that I will ever be on. You kind of look around and deny that you're in 'Star Wars' for a while to really focus on what you are really doing. It feels very improvisational within this machine you would feel is very strict and structured. And that lasts all day. And then you take everything off, go home and hopefully have no regrets and if you do, you call JJ at one o'clock in the morning, who is up. Hash that out till three, pass out, wake up on the couch and go back and do it all over again."

Driver grew up in Mishawaka, Indiana.

"Chicago was like the nearest cultural hub for people in Mishawaka," he said. "I had such odd jobs when I graduated. One of them was something I found in a newspaper where you drive your car filled with trinkets like National Geographic books or videotapes on whales and you go door to door to these businesses in Chicago and try to peddle this stuff. Didn't last very long."

"Star Wars" fans are thankful it didn't. "Star Wars: The Rise of Skywalker" is in theaters nationwide on December 20.