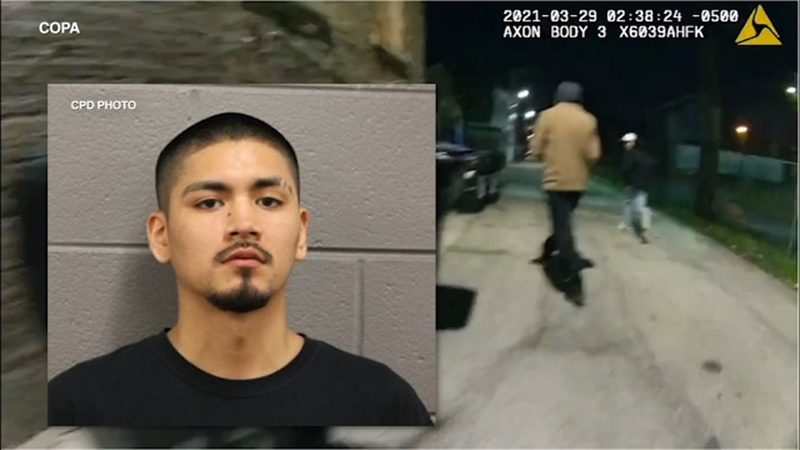 CHICAGO (WLS) -- Why did a Chicago Police Department report and a Cook County prosecutor say 13-year-old Adam Toledo was holding a gun as he was shot, when video shows the gun was on the ground?

When police arrived in that Little Village neighborhood on March 29 after reports of gunshots, they immediately began pursuing two young men.

Ruben Roman, 21, ended up in custody while 13-year-old Adam Toledo ended up dead.

Now, the criminal case against Roman raises new questions about the police shooting investigation of Toledo.

Roman, who is currently on probation for gun crimes, was with Toledo when police started chasing the teen.

Police quickly took Roman into custody and said Toledo continuing running, with a gun in his right hand.

A police tactical report, however, states Toledo was armed with a weapon.

Last weekend when Roman was in court on gun and child endangerment charges, a document submitted by Cook County prosecutors said Toledo was holding a gun when he was shot and the gun landed against a fence a few feet away.

With the video proving those statements false, Cook County State's Attorney Kim Foxx now said "An attorney who works in this office failed to fully inform himself before speaking in court. Errors like that cannot happen and this has been addressed with the individual involved. The video speaks for itself."

"They allowed the public to believe that Mr. Toledo had a gun in his hand. When, in fact, we now know he did not have a gun in his hand when he was shot," Eric Sussman, Foxx's former top deputy, told the I-Team. "I think the bigger problem for the case going forward is it calls into question, why the Chicago Police Department, who were clearly providing information to the prosecutors, and were there at this bond hearing, many of them, why they didn't correct that mistake."

"He just wasn't watching what he said. I think the reality here is, in the normal case, it would have been the smallest misstep, it just wouldn't have mattered. It's obviously getting all this attention...because of the profile of the case and the sensitivity. He just wasn't paying attention and he obviously needed to," said ABC 7 Legal Analyst Gil Soffer.