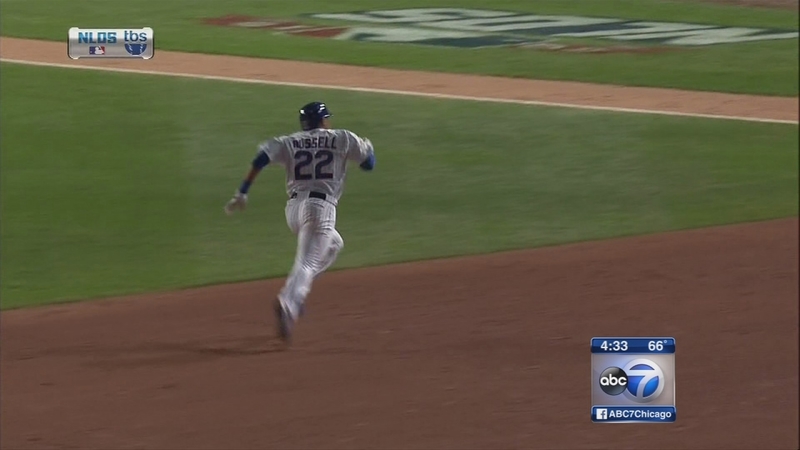 CHICAGO (WLS) -- The Cubs practiced at Wrigley Field Thursday for the first time since their series-clinching victory over the St. Louis Cardinals. But the team received some bad news that one of their young stars will not play in the national league championship series.

Shortstop Addison Russell will be out of the National League Championship Series as a result of a hamstring strain in his left leg, Cubs manager Joe Maddon said.

Russell suffered the injury during Game 3 of the NLDS series against the Cardinals.

"It wouldn't matter if they were missing two good players, I think they've got enough talent they're going to pull it off," said Andre Bolton, a Wrigleyville native.

Andre Bolton and Michael Lindsey are back in their neighborhood, not worried about Russell's injury.

"Growing up around here we waited a long time, so we know it's going to happen," said Lindsey.

Fans were seen snapping selfies and stealing kisses in front of the Wrigley marquee, a quiet contrast to the chaos on Tuesday night.

"I know that we went through about 17-18 kegs of bud light," said Freddy Fagenholz, Murphy's Bleachers.

Like most bars, Murphy's Bleachers was packed earlier this week. When the Cubs come back to play NLCS Game 3 on Tuesday, expect more of the same.

"Absolutely saw it, saw the police horses come in and kind of maintain that boundary. Think it's been good all the way around," said Bryan Tucker, Wrigleyville resident.

Even the street closures are welcome this time of year.

"I actually appreciate the closures, especially because we know they're coming, we don't always know at what time they're coming. But they close streets to try and corral everyone in to one spot," said Elyce Bader, a Wrigleyville resident.

"This is where we recharge get back to our roots," said Lindsey.

Bolton is a bit nervous - not for the Cubs - but because he's getting married on Friday.

ABC7's Rob Elgas asked: "What are the odds you get married the same year the Cubs win it all?"

"That would be great. It would be great for my father-in-law, he's a lifelong, die-hard Cubs fan. Born and raised on the South Side and he gets static from all his neighbors because he's a Cubbie fan," said Bolton.