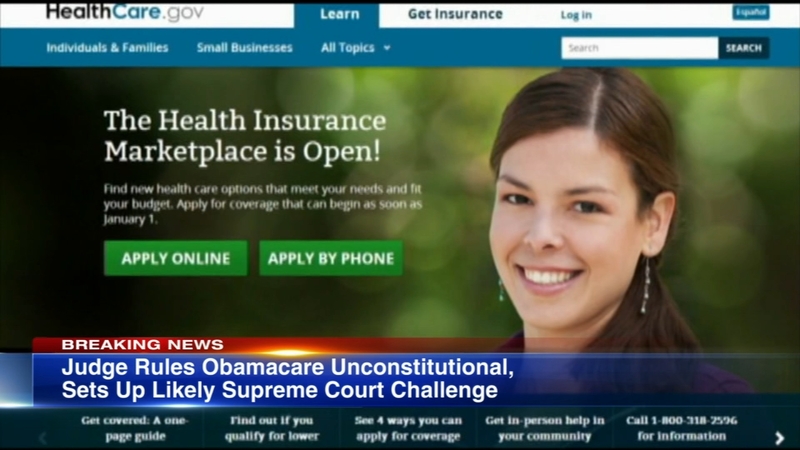 A federal judge in Texas said on Friday that the Affordable Care Act's individual coverage mandate is unconstitutional and that the rest of the law must also fall.

"The Court ... declares the Individual Mandate ... unconstitutional," District Judge Reed O'Connor wrote in his decision. "Further, the Court declares the remaining provisions of the ACA ... are inseverable and therefore invalid."

The case against the ACA, also known as Obamacare, brought by 20 Republican state attorneys general and governors, as well as two individuals. It revolves around Congress effectively eliminating the individual mandate penalty by reducing it to $0 as part of the 2017 tax cut bill.

The Republican coalition is arguing that the change rendered the mandate itself unconstitutional. They say that the voiding of the penalty, which takes effect next year, removes the legal underpinning the Supreme Court relied upon when it upheld the law in 2012 under Congress' tax power. The mandate requires nearly all Americans to get health insurance or pay a penalty.

The Trump administration said in June that it would not defend several important provisions of Obamacare in court. It agreed that the zeroing out the penalty renders the individual mandate unconstitutional but argued that that invalidates only the law's protections of those with pre-existing conditions. These include banning insurers from denying people policies or charging them more based on their medical histories, as well as limiting coverage of the treatment they need.

But the administration maintained those parts of the law were severable and the rest of the Affordable Care Act could remain in place.

Because the administration would not defend the law, California, joined by 16 other Democratic states, stepped in. They argued that the mandate remains constitutional and that the rest of the law, in any event, can stand without it. Also, they said that eliminating Obamacare or the protections for those with pre-existing conditions would harm millions of Americans.

In oral arguments in September, a lawyer for California said that the harm from striking down the law would be "devastating" and that more than 20 million Americans were able to gain health insurance under it.

The lawsuit entered the spotlight during the midterm elections, helping propel many Democratic candidates to victory. Protecting those with pre-existing conditions became a central focus of the races. Some 58 percent of Americans said they trust Democrats more to continue the law's provisions, compared to 26 percent who chose Republicans, according to a Kaiser Family Foundation election tracking poll released in mid-October.
The consumer protections targeted by the administration are central to Obamacare and transformed the health insurance landscape. Their popularity is one of the main reasons GOP lawmakers had such difficulty repealing Obamacare last year.

"Guaranteed issue" requires insurers to offer coverage to everyone regardless of their medical history. Prior to the Affordable Care Act, insurers often rejected applicants who are or had been ill or offered them only limited coverage with high rates.

Under the law's community rating provision, insurers are not allowed to set premiums based on a person's health history. And the ban on excluding pre-existing conditions from coverage meant that insurers cannot refuse to pay for treatments because of a policyholder's medical background.

All these provisions meant millions of people with less-than-perfect health records could get comprehensive coverage. But they also have pushed up premiums for those who are young and healthy. This group would have likely been able to get less expensive policies that offered fewer benefits prior to Obamacare. That has put the measures in the crosshairs of Republicans seeking to repeal the law and lower premiums.

It's no wonder that politicians on both sides of the aisle promised to protect those with pre-existing conditions during the election. Three-quarters of Americans say that it is "very important" for the law to continue prohibiting health insurers from denying coverage because of medical histories, according to the Kaiser Family Foundation's September tracking poll -- 58 percent of Republicans feel the same way. And about the same share of Americans say it's "very important" that insurers continue to be barred from charging sick people more.

This is a breaking story and will be updated.