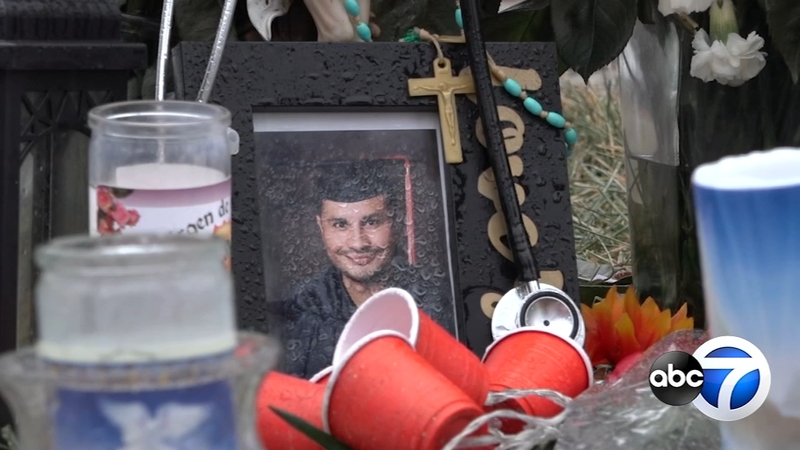 CHICAGO (WLS) -- A street corner near the 3700-block of W 32 nd Street in Little Village, decorated with flowers, candles and pictures, is now a gathering place for family after the death of 32-year-old Frank Aguilar.

Abel Aguilar, father of the slain nurse, said he can't believe his son is dead. Frank was killed in a drive-by shooting last week.

The last time the father and son were together, they were celebrating Frank's success.

"For me my son was exemplary. He never liked trouble. He was dedicated to his study," said Abel Aguilar.

Frank Aguilar was the first in his family to graduate college and start a career in nursing.

Aguilar was the second innocent person shot in Little Village in a matter of weeks. A seven-year-old girl was shot while trick-or-treating on Halloween.

"I definitely do appreciate the public's-- not response, but their actions to mourn or to show affection for Frank Aguilar," said Josh Alcazar, Frank's uncle.

Alcazar said the corner where Aguilar was shot is now where they will keep his nephew's memory alive.

As the family prepares for Aguilar's wake, Abel is asking for answers.

"I miss my son and I want justice for my son," he said.

Frank Aguilar's wake and viewing will be at La Villita Community Church on Wednesday, November 20, from 1 p.m. to 9 p.m. His funeral will be on November 21.