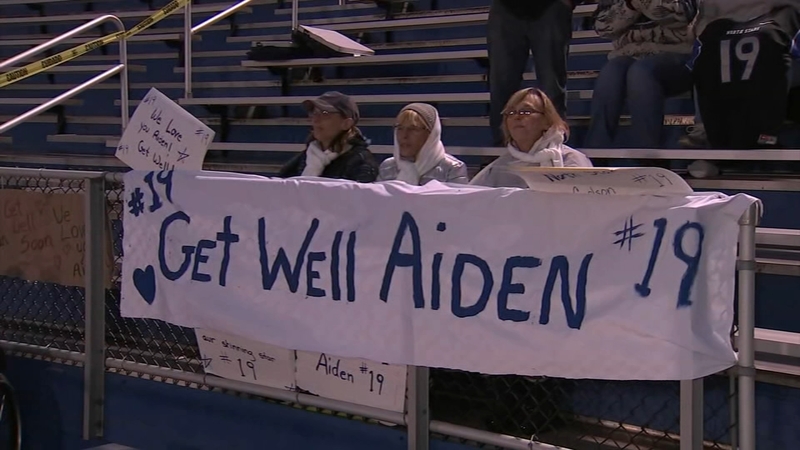 Aidan Carlson's teammates at St. Charles North High School are playing in honor of the sophomore one week after he suffered a brain injury during a game.

Aidan's family, as well as dozens of teammates, classmates and friends came out to show their support for his recovery.

"Everybody loves him so much," said Gail Carlson, Aidan's great aunt. "He's just been a sweetheart since he was born and his true passion is football."

Just before the start of the game Carlson's teammates carried his jersey, no. 19, out to the coin toss and he was named an honorary captain.

"It has been absolutely wonderful," Gail said.

Aidan's two great aunts, Gail and Laure, made sure their family was represented to help honor the teen, who was recently released from pediatric ICU.

"We are a close, close family and we want him to have full recovery and hope for the best for him," Laure Carlson said.

"He's a brother, as my son puts it, 'Mom, he's one of our brothers. He's amazing. He's an amazing kid. We need to do something for him,'" said Rosa Litgen, parent.

"We live in such a great community that really understand the importance of reaching out and showing Aidan and his family how much they're supporting them," said Carol Smith, school district spokesperson.

According to doctors cited on a family-run GoFundMe page that's now raised more than $30,000, Carlson suffered a brain injury during a junior varsity game earlier this month. Tonight his teammates and school want him to know they will play for him, and for his smooth recovery ahead.

Now as he starts his road to recovery, his supporters want him to know they're behind him.

"Aidan, we love you," Litgen said. "We want you to get better. Your brothers love you, they miss you and AC strong, man."

"He needs to know that his St. Charles North family is rallying around him, they are pulling for him, they are thinking about him and they really are going to play for him tonight," Smith said.