FACT CHECK: Trump on an AIDS vaccine that doesn't exist 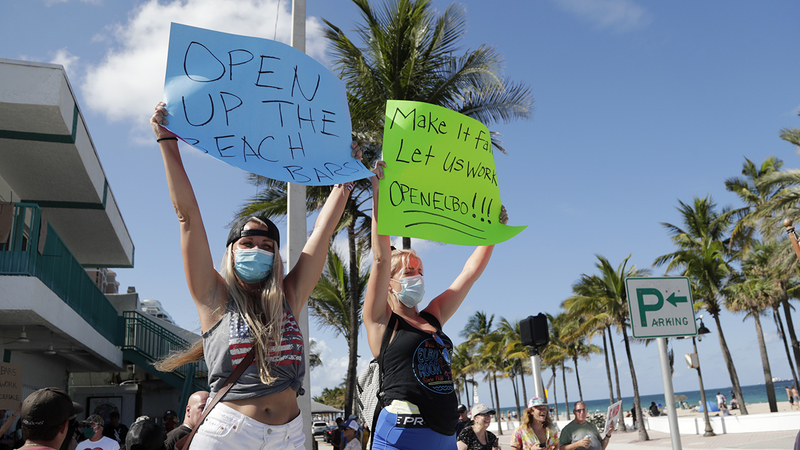 WASHINGTON -- Seizing on a medical milestone that doesn't exist, President Donald Trump said Tuesday he thinks the same scientific expertise that produced a vaccine for AIDS can deliver one soon for COVID-19, too. There is no vaccine for AIDS.

Trump also accused the previous administration of making no effort to stop abusive policing, ignoring a conspicuous drive by President Barack Obama to do just that.

Trump addressed policing and the pandemic in remarks at the White House for the signing of an executive order encouraging better law enforcement practices. A day earlier, his vice president mischaracterized the state of the pandemic in Oklahoma as Trump gears up for a weekend rally in Tulsa, his first such event in months.

A look at their statements:

THE FACTS: No one has come up with a vaccine for AIDS, nor is there a cure. Nearly 38,000 people were diagnosed with HIV infection in the U.S. and about 1.7 million globally in 2018, according to the latest totals.

However, powerful medicines have turned HIV into a manageable chronic condition for many patients, prompting major global efforts to get those drugs to more of the people who need them.

In addition, taking certain anti-HIV drugs every day also can work as prevention, dramatically reducing the chances that someone who is still healthy becomes infected through sex or injection drug use. A small fraction of the Americans who might benefit use that so-called "pre-exposure prophylaxis."

Yet there is "no vaccine available that will prevent HIV infection or treat those who have it," says the U.S. Health & Human Services Department in outlining efforts to develop one.

Trump may have been trying to correct himself when he followed up with the comment that science has "various things" for AIDS.

As for a vaccine to end the coronavirus pandemic, Trump appears confident one will be ready by the end of the year, but public health authorities warn there's no guarantee that any of the candidates currently being tested will pan out. Dr. Anthony Fauci of the National Institutes of Health says a vaccine by year's end is conceivable only if everything goes right in final testing this summer.

TRUMP, on police practices: "President Obama and Vice President Biden never even tried to fix this during their eight-year period. The reason they didn't try is because they had no idea how to do it." - Tuesday at the White House.

THE FACTS: That is false.

Under the Obama administration, the Justice Department opened 25 wide-ranging civil rights investigations into local law enforcement agencies across the country, including police departments in Chicago, Baltimore and Ferguson, Missouri.

Those investigations were aimed at overhauling troubled departments with patterns of civil rights abuses and generally resulted in court-enforceable consent decrees requiring the agencies to commit to a series of fundamental changes with regard to the use of force, stops, searches and more.

Besides that, the Obama White House established a task force to come up with best policing practices and to recommend ways to improve community trust while also reducing crime. That task force released its report in 2015.

Public pressure may be more intense on Congress now to pass sweeping laws on policing, after nationwide protests over the death of George Floyd in Minneapolis. But the limited steps Trump took Tuesday steered around Congress.

Following weeks of national protests, President Donald Trump signed an executive order on June 16 aimed at encouraging better police practices and establishing a database to keep track of officers with a history of excessive use of force.

VICE PRESIDENT MIKE PENCE: "Oklahoma has really been in the forefront of our efforts to slow the spread. And in a very real sense, they've flattened the curve. ... The number of cases in Oklahoma - it's declined precipitously." -- remarks Monday.

THE FACTS: The curve has actually been spiking higher since late May, not flattening.

Oklahoma did report just 41 new coronavirus cases on May 28, a relative low compared with early April. But infections have since increased. Over the weekend, the state posted sharply higher numbers and set a daily record of new cases on Tuesday, at 228.

Oklahoma is among the nearly half the states that have seen coronavirus infections rise since May when governors began loosening social distancing orders.

In Tulsa, where a Trump rally is scheduled for Saturday, the infection rate is also rising steadily after remaining moderate for months. The four-day average number of new cases in the city has doubled from the previous peak in April. The city's own health department director, Dr. Bruce Dart, has said he hopes the rally will be postponed, noting that large indoor gatherings are partially to blame for the recent spread.