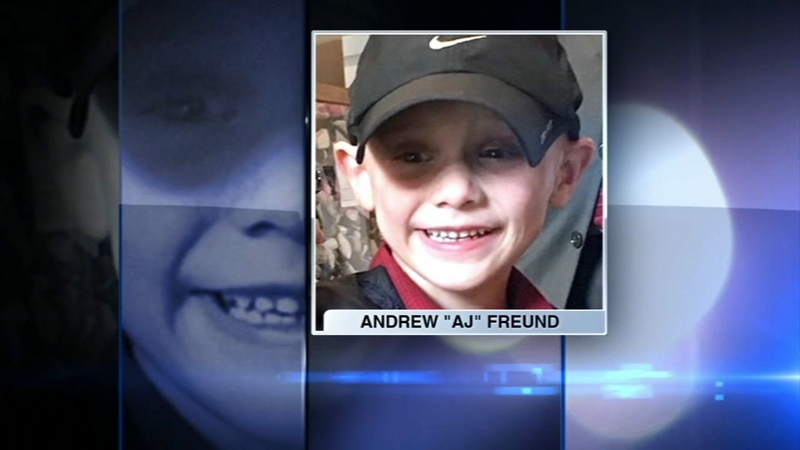 Interim Coroner David Devane formally positively identified the body found in a shallow grave in Woodstock Wednesday morning as the 5-year-old boy from Crystal Lake. He wrote the autopsy determined his cause of death was "craniocerebral trauma as a consequence of multiple blunt force injuries."

AJ's parents Joann Cunningham and Andrew Freund Sr. are accused of killing their son. Bond was set at $5 million each for the couple. They must pay $500,000 each to be released from custody.

Cunningham and Freund Sr. each face first-degree murder charges as well as aggravated battery, and failure to report a child death charges. A pregnant Cunningham nodded through tears as she heard the long list of felony counts in court Thursday.

No family members were in court to support the parents Thursday. Cunningham's family said she stopped communicating with them a couple years ago. They said they had gained custody of her older son by another father six years ago, and recently were trying to get her to move out with AJ and his younger brother.

Many in the community said they were also concerned about the kids.

"I feel like he didn't have a chance from the beginning," neighbor Teresa Hay said.

The Crystal Lake community is mourning after AJ Freund's body was found in Woodstock. His parents were charged with murder.

Crystal Lake police said they would be removing the flowers, balloons, stuffed animals and other items left outside AJ's home because they are expecting rain and want to be able to give them to AJ's family, including his younger brother, in good condition.

Many neighbors visited the makeshift memorial since his parents reported him missing.

"I was just praying and hoping that AJ would be found. Seeing his little smile in that picture is just heartbreaking<' said Randy Funk, president of the Crystal Lake Lions Club.

"I can't let myself go there yet, to think about what he went through," said neighbor Janelle Butler.

For Butler, who lives next door, the news of how AJ died brought back a chilling memory from January of last year.

"That is going to haunt me," she said. "I remember that like a movie that you play back that you wish didn't happen."

Butler said on that January night she heard a child crying inside a car outside the family's home. When she approached the car she found AJ and his brother alone, without shirts or shoes.

"He said, 'My parents are going to kill each other,' basically, 'but if they don't, we're going to take an adventure and go to a hotel tonight,'" Butler recalled. "I ran back, grabbed my phone, and as I got back Joann was getting in the car and she yelled at me, 'Do not call the police.'"

She granted the request that night, but Butler said she would go on to call police several more times.

"Now knowing how it turned out, I can't wrap my head around it," she said.

Butler and her neighbors said they plan to meet with Crystal Lake's mayor Friday to propose turning the family's home into a park to honor AJ. The Crystal Lake Lion's Club has already raised about $15,000 to help cover the cost of the boy's funeral. 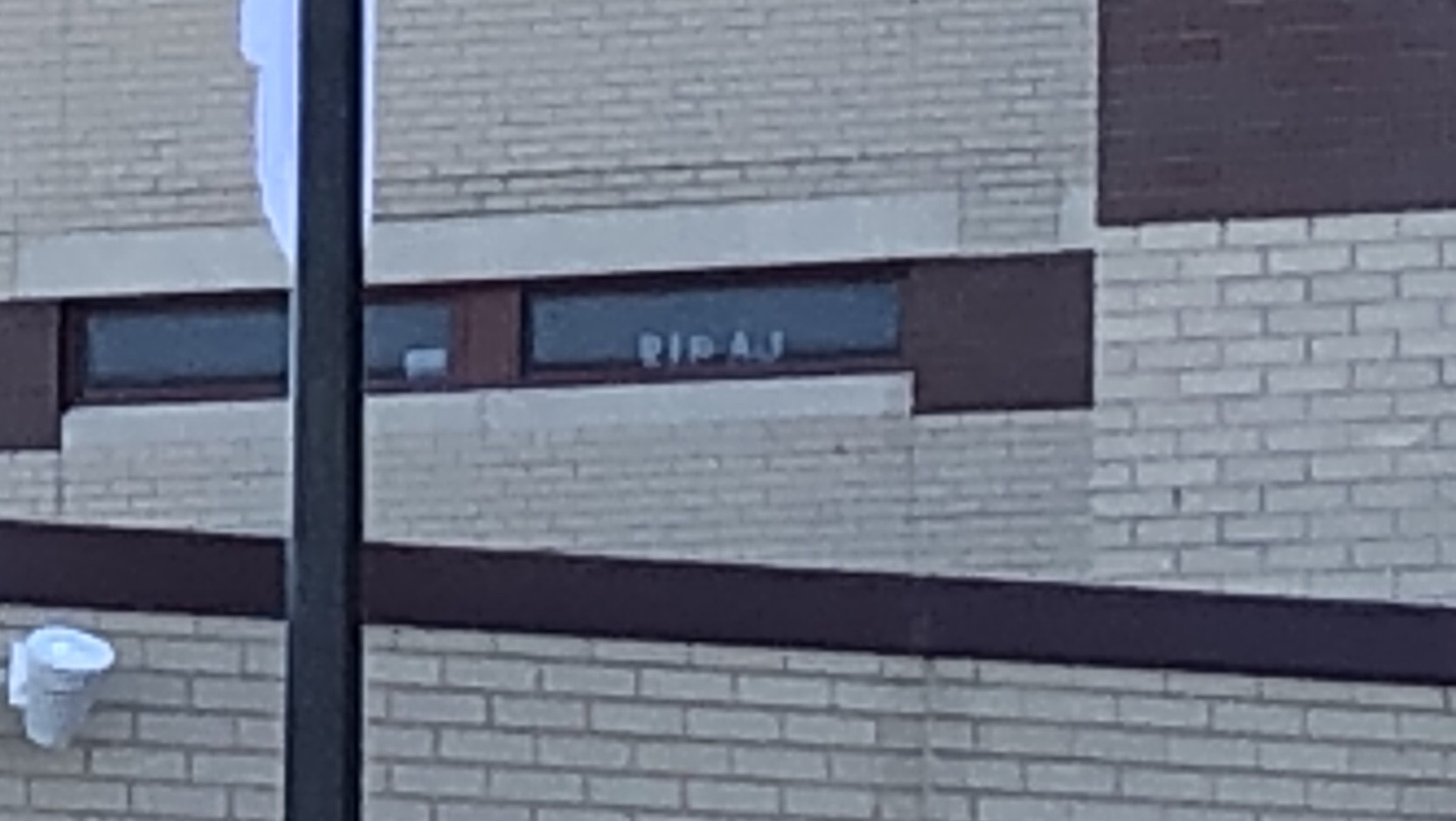 A small sign that said "RIP AJ" in white letters was seen in a window at the McHenry County jail on Thursday.

In the windows of the McHenry County Jail, other inmates hung a sign saying "RIP AJ."

On Wednesday, AJ's body was found on farm property in nearby Woodstock, Illinois.

Investigators with local, state and federal authorities found the body after the couple was confronted with cell phone evidence.

Chuck Goudie and the ABC7 I-Team report that police used cell phone data to eventually lead them to the body of the five year old boy, who was buried in a shallow grave on a Woodst

"Information was obtained from forensic analysis of cell phone data. Once presented with the evidence obtained by investigators, both Joann and Andrew Sr. provided information that ultimately led to recovery," Crystal Lake Police Chief Jim Black said at a press conference Wednesday.

As crews recovered the 5-year-old's body, evidence technicians removed clues from the family's home in Crystal Lake, including a child's mattress and a shovel.

"The Crystal Lake police and the FBI are doing a wonderful job. We are all just doing everything that we can at this point," Freund Sr. told the media during the search.

He said he had no idea where AJ was, but vowed he would not stop looking for him.
When asked what he thought about people who assumed he was withholding information, Freund Sr. said, "I have no control over what people think. I just want my son to come home."

Cunningham also made a tearful plea on Good Morning America for her son to come home.

"I want us home together. I just want my kid. My kids are my life. They're my kids," Cunningham said.

Investigators said the couple knew exactly where their 5-year-old son was the entire time.
AJ's murder has left a neighborhood horrified and helpless that something so awful could happen so close to their homes.

Neighbors did not ignore problems that were going on inside the five year old's home. Janelle Butler said she and others reached out several times offering to help the boy's parents, even calling police when they suspected AJ and his brother were not safe.

"I take some comfort, I guess, and I'm hoping all the other neighbors do that we did try," Butler said. "We tried to get the authorities involved, I tried, we all tried."

ABC7 learned the Freund family had a long history with local police, who responded to the home 17 times in five years for allegations of both abuse and drug use.

Child abuse experts said AJ's neighbors did exactly what they should have.

"Just because you are not a mandated reporter by law does not mean you can't call for help," said Char Rivette Executive Director of Chicago Children's Advocacy Center.

This case leaving many asking what more could have been done to protect AJ Freund as well as other victims of suspected child abuse or neglect.

In AJ's case, the state agency has had involvement with the boy and his family since AJ's birth.

"After a nearly week-long search for missing Andrew "A.J." Freund, law enforcement officials today confirmed his death. This news is heartbreaking. Protecting vulnerable children who come to our attention is at the core of our mission at DCFS. All of us feel this loss. Our priority is the care and safety of Andrew's younger sibling. We will continue to cooperate with law enforcement in their ongoing investigation. The Department is committed to conducting a comprehensive review of the entirety of our work with Andrew's family to understand our shortcomings and to be fully transparent with the public on any steps we are taking to address the issues."
EMBED More News Videos

During the search, the couple's 3-year-old son was put in the custody of the Illinois Department of Children and Family Services. Cunningham tried to regain custody on April 23, but the hearing was delayed.