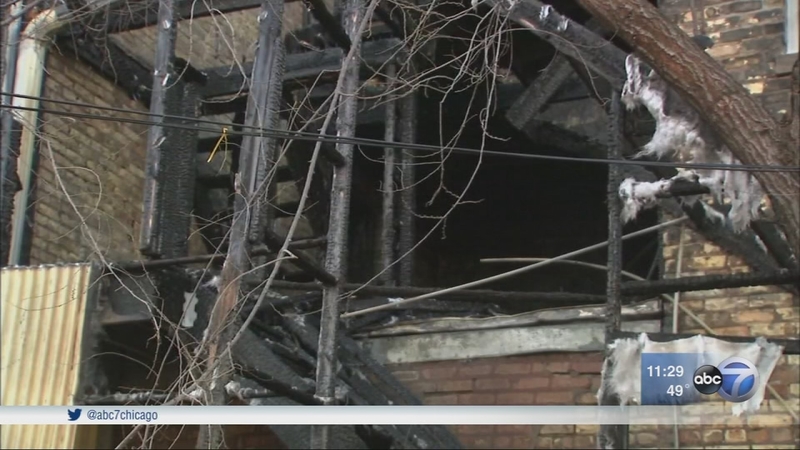 CHICAGO (WLS) -- Chicago firefighters helped a woman escape from the window of a burning building early Thursday morning on Chicago's Northwest Side. But not everyone made it out so easily.

Flames and smoke poured out of the three-story structure in the 3800-block of West Montrose Avenue in the city's Albany Park neighborhood. The extra-alarm fire broke out shortly after 1 a.m. in the rear of the building.

Several people had to be rescued through broken windows by firefighters on ladders. Four people were hurt, including a child. They were transported in fair-to-serious condition to Swedish Covenant Hospital.

The blaze was extinguished by 2 a.m. Residents said their apartments were severely damaged and unlivable.

The district fire chief said luckily, there were some working smoke detectors in the building that alerted residents to the fire.

"I was woken up by glass breaking and people shouting. I see all these police and the fire department and everyone standing taking pictures. I look out my window and there are flames next door. It's terrifying. Look, I can still see them," one neighbor said.

Residents spent Thursday morning trying to salvage anything they could, trying to forget their terrifying wake up call.

"I heard everybody screaming. They were saying, 'Fire, fire!'" said Carolyn Bello, a resident.

"People above me are hanging out the window, 'Help, help, help!' They couldn't get out. No way to get out," Hipolito Bello said. "The back porch area was just engulfed in flames. There was no way, leaving out the back way,"

The Bellos were able to go back for Carolyn's walker and a suitcase full of clothes.

"I don't have a home now, " Carolyn Bello said.

"Now we're back to, like, when we first started. Square one. Just trying to struggle now," Hipolito Bello said.

Fire officials said at least 12 people were displaced by the fire. The American Red Cross was called to the scene to assist with housing. The Salvation Army also passed out food.

"Kitchen area. It's completely gone. Living room, completely gone. We have to figure out where we're going to go and I don't know," one resident said. "Things happen and we have to live with it, you know? So hopefully everything's going to be OK. Everybody's OK in the building, so that's all that matters."