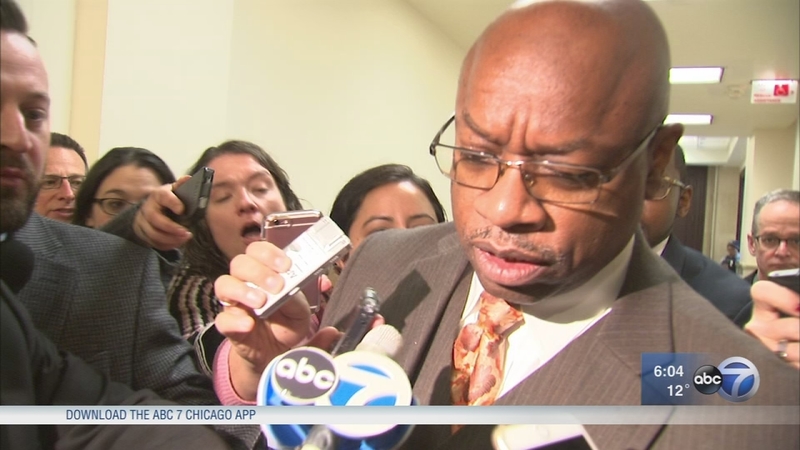 The South Side alderman had been the target of a grand jury investigation for at least the past year or so. He was in the City Council chamber when the indictment was unsealed Wednesday morning. He had very little to say about the case as he left mid-session, surrounded by a pack of reporters.

"I have not seen any details so it's not possible for me to make any kind of comment," Cochran said.

The 15-count indictment alleges Cochran shook down a liquor store manager and a real estate developer and stole tens of thousands of dollars from a charity that he founded to help seniors and children. Court documents allege he used some of money at casinos and to pay the college tuition of his daughter.

"You cannot use public service for your own personal gain," Mayor Rahm Emanuel said.

Mayor Emanuel said he did not know enough about the case to comment on legal problem of one of his council allies. Cochran's colleagues were sympathetic.

"It's an unfortunate situation that he's in and his family is in right now so we want to pray for him and hope for the best," Ald. Anthony Beale (9th Ward) said.

Cochran is the third 20th Ward alderman to indicted for corruption in the past 30 years. His immediate predecessor, Arenda Troutman, went to prison in 2008.

"This is one of the investigations that I referred over to the FBI prior to leaving as legislative inspector general," said Faisal Khan, the former city council inspector general who in effect was fired by alderman in 2015.

Khan, who now runs an independent watchdog agency, said the Cochran corruption investigation is only a beginning.

"Mr. Cochran is not the problem, he is part of the problem and the culture here in Chicago. The system is the problem here," Khan said.

In a text message Wednesday afternoon, Cochran wrote that he and his lawyers would work with the U.S. Attorney to provide "clarity" to resolve the matter. He added that he would continue to serve the 20th Ward.

Cochran's attorney, Thomas Durkin, said in a written statement: "I am in New York today giving a lecture, and have not had a chance to review the indictment thoroughly. However, I believe there may be significant legal and factual challenges to it. Alderman Cochran has a tremendous reputation and has been a community leader for years, in addition to being a Chicago Police Officer. He has a Masters degree in Public Administration and has fought hard for the residents of the 20th Ward. We intend to fight these charges vigorously."