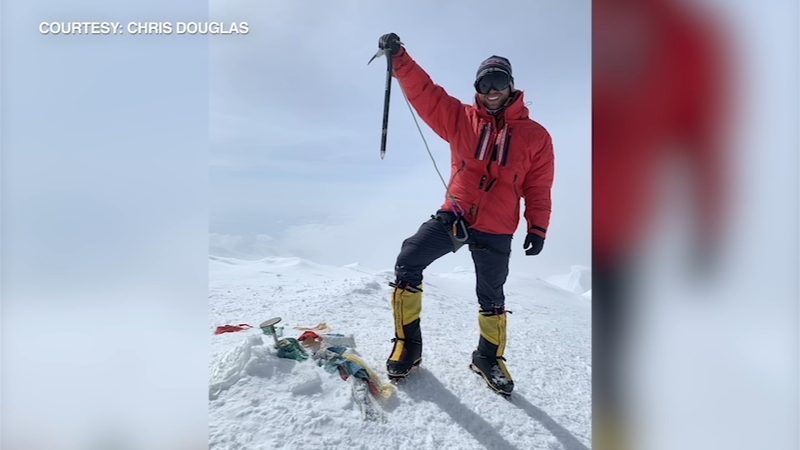 Smiling on the snow-covered Alaskan mountain on June 23, his pick ax hoisted victoriously more than 20,000 feet in the air, the Chicagoan began to realize the enormity of his achievement.

"As I got towards the summit I definitely got emotional. There were a few tears," he said, explaining that he'd "climbed the seven summits, which is the highest mountain on each continent, cross-country skied the last degree, or 70 or so miles to both the North and South Pole."

According to the website of fellow adventurer Vanessa O'Brien, who keeps count, Pancoe is just the 49th person to ever complete this version of the challenge. It was a nearly three-year journey Pancoe said demanded constant training at home, over a dozen added climbs around the world, and an investment of more than $200,000 of his own money.

"And on top of that it's been extremely hard on friends, family," Pancoe added.

For a brief time, Alex Pancoe stood on top of the world over 29,000 feet high at the summit of Mt. Everes

On those climbs, peril loomed, like when he summitted Everest one day after the now infamous, deadly traffic jam.

But Pancoe persevered, thinking of the Lurie Children's Hospital cancer patients he raised money for on each climb.

Alex Pancoe is out to prove that a cancer scare shouldn't stop you from pursuing your dreams.

"'Hey, I just dedicated this to so and so who's fighting for their lives, I'm not gonna let them down,'" he said of what went through his mind when he considered turning back on the world's tallest mountain.

Pancoe carried these kids' motivations, hand-written on a Lurie flag, to the peaks of Everest and Denali. Now that he's completed the grand slam, Pancoe plans to bring that flag back to Lurie as a thank you for the kids' inspiration.