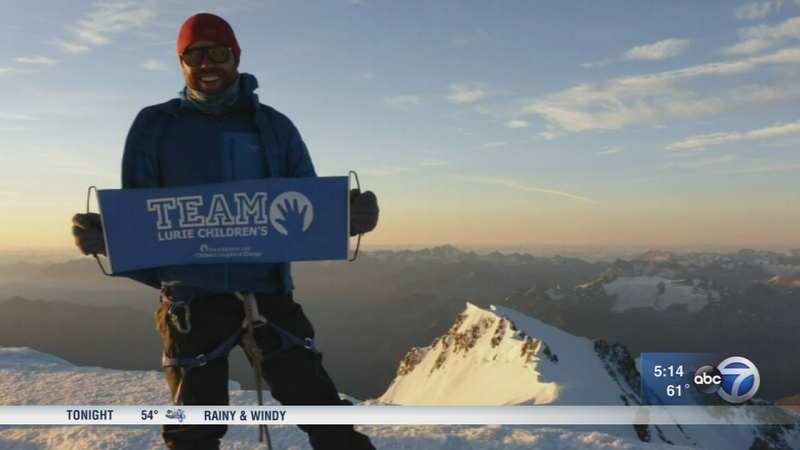 CHICAGO (WLS) -- A Chicago man hopes to soon be one of the only people in the world to climb the highest mountains on each of the seven continents, and he's doing it all to raise money for a good cause.

Alex Pancoe, 31, was diagnosed with a brain tumor at just 18 years old after getting some really bad headaches.

"Before long it got to the point where if I did certain movements, I had temporary paralysis," Pancoe said. "I had a brain tumor compressing on my nerves."

He had surgery almost immediately, and when he got the news that his tumor was benign, he took it as a second chance at life. He wanted to give back to Lurie Children's Hospital, and promised his doctor he would find a way to repay him.

He is still on that mission. His plan is to raise $1 million for pediatric tumor research by climbing all seven of those summits.

"I'm doing what's called the 'explorers grand slam,' it's climbing the seven summits, the highest mountain on each continent, and sky traversing to the north and south pole," said Pancoe.

Only 58 people have climbed all seven in the world. Pancoe has already climbed three, and is on his way to the next. He trains three hours a day at the gym, including spending an hour a day carrying a 60 lb. backpack on the stair master.

"One of the things I love about mountain climbing is you do have to conquer your fear at any moment, something can happen to you, and you really just need to accept that, that doesn't mean I'm not scared, I'm scared when I am up there, but you just have to kind of embrace it and overcome that," Pancoe said.

Pancoe doesn't let the fear stop him. On top of each summit he climbs, he leaves his mark. Three flags - one for Lurie Children's Hospital, one for his alma mater, Northwestern, and one for his beloved team, the Chicago Cubs.

The doctors at Lurie said they are proud of his success.

"Just think about that, this young man who had this life-changing event, this tragedy has now taken his energy and moved it forward to help others that's so inspiring to us all," said Dr. Steward Goldman, Lurie division head of hematology/oncology.

Pancoe is trying to raise a million dollars for Lurie Children's Hospital and their pediatric tumor research. He pays for all of his trips out of his own pocket, so every dollar raised goes to the hospital.