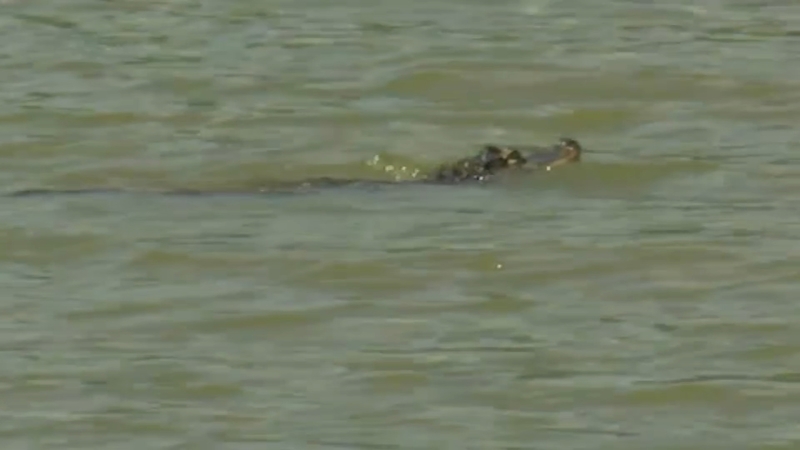 CHICAGO (WLS) -- Authorities are stepping up their efforts to try and capture the elusive alligator spotted in Humboldt Park almost a week ago.

The gator, now dubbed 'Chance the Snapper,' was first spotted Tuesday morning. He has since become a sensation, drawing crowds of onlookers and even getting the attention of his namesake.

However, experts said the crowds may be causing Chance to slip underwater more often, making it more difficult to catch him.

As a result, Mayor Lori Lightfoot has ordered some road and path closures in Humboldt Park beginning Sunday night, according to 26th Ward Alderman Roberto Maldonado.

The boathouse parking lot closed at 9 p.m. for a soft closure of the area. Pedestrian paths throughout the east side of Humboldt Park will then be barricaded. All access to North Luis Munoz Marin Drive east of North Humboldt Drive will be closed until further notice beginning at 11 p.m., according to Maldonado's office.

Officials have previously tried to entice Chance the Snapper with rat bait.

Alligator Bob with the Chicago Herpetological Society previously floated the idea of trying to lure the gator with sound as well.

"One of the theories we're using is an underwater speaker that will have the baby cries in a certain area," he said. "See if over a certain amount of time the local alligator hears it and is old enough to respond."

Paul Borbon said he would give the gator some Gatorade if he ran across him.

Derek Allen, another gator gaper, said he would "Steve Irwin it and put it back where it belongs."

The Chicago Park District put out an advisory about the gator, placed temporary restrictions on park usage, and released safety guidelines during the search for the reptile. Park visitors have been instructed not to swim, canoe or fish in the lagoon; keep their distance from the lagoon edge, including grassy areas, as alligators are often located along the water's edge; stay at least 30 feet away from the alligator if you see it and back away slowly; do not feed the alligator; keep pets away from the water's edge as they are the size and shape of common alligator prey; and to not throw things or harass the alligator.
Experts believe it has been in the lagoon for less than a week, and is used to being fed by its owner. It apparently hasn't started hunting any local animals, but will soon.