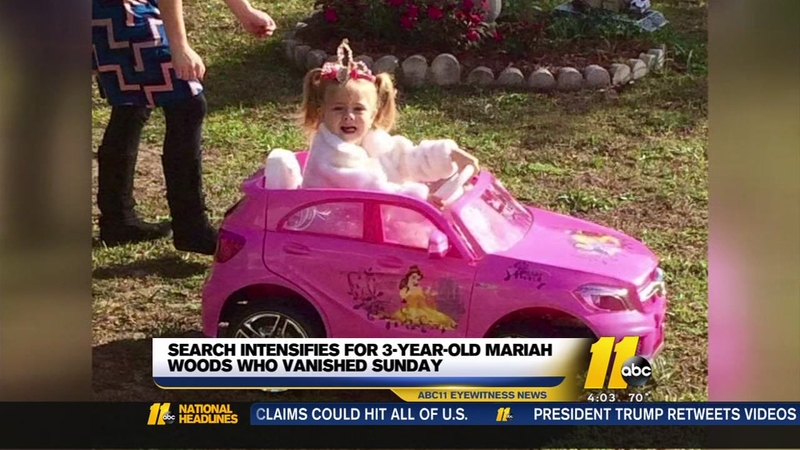 AMBER ALERT: Sheriff asks public to search around their homes

A North Carolina Wildlife pickup with a boat was seen near the search site where authorities have a road blocked off.

.@NCWildlife pickup with a boat in back seen coming from High Hill Rd. where authorities have road blocked off. Search for #MariahWoods continues in Onslow County. #ABC11 pic.twitter.com/wap7V8Bf6w

Officials confirm to ABC11 that they are searching an area that contains a body of water.

In a news conference Wednesday afternoon, authorities asked the public to search around their own homes, barns, and sheds to help look for signs that may help to locate Mariah, adding they should report anything that "looks out of the ordinary."

Meanwhile, authorities now confirm that surveillance photos released by the FBI early Wednesday morning were not of Mariah.

The FBI said the woman in the picture does not have any connection to their ongoing investigation to find Mariah, who disappearance in Onslow County Monday prompted a Amber Alert that has gained national attention.

WCTI spoke with a 23-year-old Newport, North Carolina woman Wednesday who said she is the woman pictured in the surveillance photos.

Jetta Long said she doesn't know Mariah's family, but said she is frustrated that the surveillance photos "may have gotten the hopes of the family up."

Long also revealed that her daughter was born with a shortened leg, so she said she understood how her little girl could have been mistaken for the missing toddler.

Mariah Woods' family has said that the 3-year-old struggles to get around on her own and wears leg braces for assistance.

Mariah has been missing since Sunday night when her mother put her to bed.

Woods lives with her mother and her mother's live-in boyfriend on Dawson Cabin Road in Jacksonville, North Carolina.

This is the home where 3-year-old Mariah Woods disappeared from Sunday night in Jacksonville. Onslow County Sheriff’s Office asking for public’s help in finding her. #ABC11 pic.twitter.com/cwZ4bJnC0d

Her biological father Alex Woods told WCTI 12 Tuesday that he found out his daughter was missing when the Amber Alert was issued and he hasn't seen her for about a year. He said he doesn't believe his daughter was abducted.

"Someone just walked right up in there, grabbed the 3-year-old out of the bed and she didn't cry, she didn't scream?" Alex Woods said. "Nobody heard anything? Four people in the house, two adults and two kids, someone just comes up and snatches the baby and walks out?"


ABC News reports that her mother reached out to the public in an emotion-filled plea Monday.

"Please, bring her back ... She's my baby, she's my everything," said Kristy Woods in a press conference. "(I) just to be able to touch her and hold her and not let her go again. I'd give anything."

She is described as a white female standing about 2' 9" tall and weighing around 30 pounds. Mariah has brown hair and blue eyes.

The FBI is assisting state and local law enforcement with the investigation; they have brought in the Child Abduction Rapid Deployment for further assistance.

Marines based at nearby Camp Lejeune are also assisting in the search.

Authorities said they have been using all means necessary to find Mariah including ground searches assist by a helicopter and K9 units - so far, officials have covered 100 acres.

Officials said more than 225 state and federal personnel are working on the case, adding that they have conducted nearly 100 interviews and followed up on more than 140 leads.