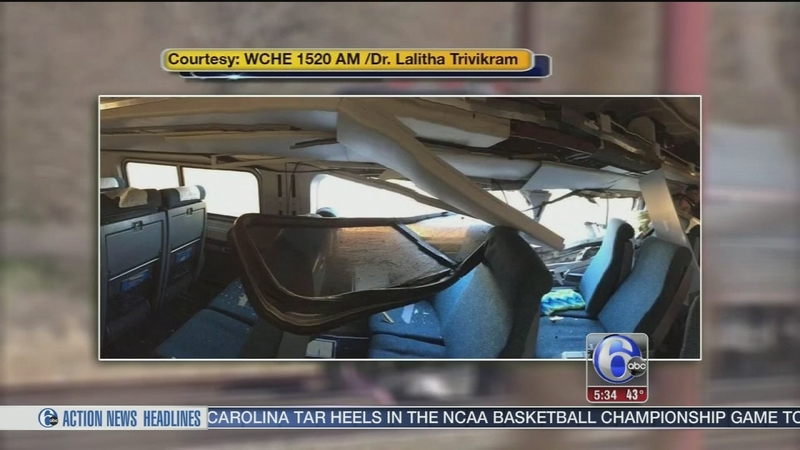 CHESTER, Pa. -- Autopsies will be conducted Monday on two people killed after an Amtrak train struck a backhoe in Chester, Delaware County.

Meantime, Amtrak and SEPTA service has resumed on the Northeast Corridor, with some residual delays.


In a press briefing held Sunday afternoon, NTSB officials said they were looking at speed, mechanical operations and signaling on the tracks to determine what went wrong.

"As of now, we have recovered the event data recorder, the forward-facing video and the inward-facing video from the locomotive to send to our laboratory in Washington, D.C.," said Ryan Frigo, NTSB Investigator in Charge.

The accident was first reported at 7:53 a.m. Sunday near Booth Street on the Palmetto Train 89.

The train was operating from New York to Savannah, Georgia.

Amtrak officials say the train struck a backhoe that was on the tracks. The impact derailed the lead engine of the train.

Action News spoke with some panicked passengers as they were off-loading from the train.

"Rapid deceleration, screaming and shouting. The car filled up with smoke, then we came to a stop," said David Nguyen, Washington, D.C.

"We hit something, and you could feel the impact," said Kamati Pinkston, New York City. "It was a big bang."

We are aware of the incident involving the Palmetto train 89 south of Philadelphia and we will provide update as they become available.

Officials say 330 passengers and seven crew members were on board at the time of the accident.

Of those 300 passengers, 30 were hospitalized for unknown injuries. A locomotive engineer was also hospitalized. No word on their conditions.

Officials with the Pennsylvania Emergency Management confirm there were two fatalities. Officials say they were not passengers. Amtrak says they were workers in the vicinity of the backhoe.

A New York senator identified the victims as the backhoe operator and a supervisor.

Schumer said debris from the crash flew into the first two cars, injuring some passengers.

Schumer said it's unclear whether the backhoe was performing regular maintenance or whether it was cleaning up debris from high overnight winds. He called for a complete investigation.

Linton Holmes of Wilson, North Carolina was in the back of the train when it derailed in Delaware County.


"The train was rumbling. We got off track, I guess. It was just a bunch of dust. There was dust everywhere.

Holmes recalled an explosion of some kind.

"It was an explosion. We got off track and then there was like a big explosion. Then there was a fire and windows burst out. Some people were cut up, but it was just minor injuries," Holmes said.

Mariam Akhtar from Washington, D.C. was on the sixth car.


"It felt like the train hit something, and there were like three or four really big bangs and it kind of threw us off the seats we were sitting in.

"There was a lot of smoke and everybody was yelling. The train kind of stopped and, later on, everybody was running to the front. Then the people who were in the front started walking toward the back," Akhtar said.

She says she was on the train for about 30 minutes before she was able to exit.

Action News also spoke with a man on the phone whose 52-year-old mother was on the train. He says she was on her way from New York City to her home in Maryland.

His mother said she has injuries to her knees, head and back, but he was able to talk to her on the phone. She told him it was a scary and chaotic scene; she was stuck on the train for some time before being taken out in an ambulance.

Action News has obtained scanner audio from first responders who were called to the scene shortly after the crash.

Emergency crews on the scene aided the passengers at 9th and Langley in Trainer.

Other passengers were directed to the rear hall of the Trainer United Methodist Church. Later, SEPTA buses were brought in to transport the passengers.

Stephen Gardner, Executive Vice President of Amtrak, said all passengers were being taken to Philadelphia.

@NTSB investigators on scene after #Amtrak89 hit a backhoe in Trainer. @6abc pic.twitter.com/dIYPrd8Cot

The Federal Railroad Administration responded to the scene. NTSB investigators worked into the night, trying to piece together what went wrong, and why this heavy piece of machinery was on an active track.

This incident comes almost a year after another fatal train accident.

Back in May 2015, Amtrak Train 188 crashed in the Port Richmond section of Philadelphia and left eight people dead.

The train was bound for New York City.

PHOTOS: Victims of May 2015 Amtrak crash

We are deeply saddened by today's accident - the latest deadly tragedy along the Amtrak Northeast Corridor. While we greatly respect the investigative process and will not speculate as to cause, we do know that every safety protocol and practice must be closely examined to ensure passengers, crews, contractors, and the general public that our nation's passenger rail service is being operated as safely as possible.

We at NARP were saddened to learn this morning of the derailment just south of Philadelphia that has claimed at least two lives and injured many more. As a former firefighter/medic, I can attest to how chaotic these kinds of incidents can be and to how any initial information that emerges is often incorrect or incomplete. While it is too early to know how this incident occurred, I'm sure investigators will do a thorough job to help all of us understand how this tragedy occurred and how future incidents might be prevented.