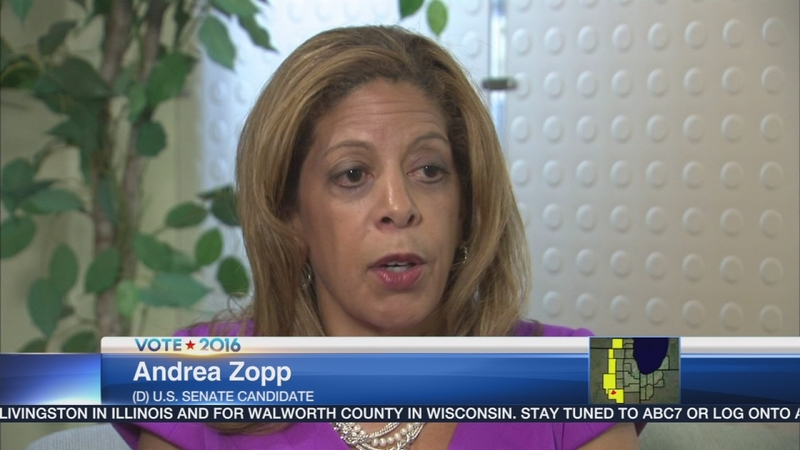 CHICAGO (WLS) -- Illinois Democrats hoping to replace Republican senator Mark Kirk in the 2016 election are ramping up their campaigns for next year's primary.

Among them is former Chicago Urban League president Andrea Zopp.

The large banner at 41st and South King Drive is evidence that Andrea Zopp is serious about the U.S. Senate.

The former prosecutor, corporate lawyer, Urban League president, school board member and mother is banking on her varied experiences as she launches her campaign.

"This isn't I've read about it or I thought about it, I talked to people about it," Zopp says. "I've been working on these issues and I've been effective."

Zopp wants to replace the incumbent Kirk, who she described as too conservative.

"He is right there with his party, not the moderate that he likes to present himself to be," Zopp says.

To win the nomination Zopp must beat Democratic congresswoman Tammy Duckworth, who already been endorsed by the Democratic Senate Campaign Committee, and Cook County Commissioner Richard Boykin who's quick to point out that Zopp, while on the CPS board, voted to close 50 city schools.

"Look, whenever you close a school you prepare to open a prison," Boykin says.

But Zopp makes no apologies, saying, "Ninety-two percent of the students ended up in better schools, which is the point."

"This is not about Mark Kirk, this is about the people of Illinois," Boykin counters.

Zopp says she's not concerned that three African-Americans on the ballot will split black vote, which can make up as much as 35 to 40 percent of a Democratic primary.

"I am an African-American woman and mother and those are important but that's not the primary reason people will support me," she says.

Zopp already has raised in the neighborhood of $1 million. That's significantly less than Duckworth but a lot more than either Boykin or Harris. She also says she does not believe the other black candidates were inserted in the race to divide the African-American vote.