CHICAGO (WLS) -- A Rogers Park animal shelter that stepped in to care for a cat who was doused with boiling water in a video posted earlier this month says the injured cat is improving.

The cat, named Driver, may have to have another surgery but is doing well, the shelter said in a Wednesday update.

An 18-year-old man faces animal cruelty charges after the video was posted online of him allegedly pouring the scalding water onto the cat, police said.

Leon Teague, of Chicago, was arrested after officials said he was identified in a Facebook video showing him luring a cat onto a rear porch and pouring boiling water on the animal.

The Felines & Canines animal shelter says Driver suffered extensive burn wounds to his back, sides, belly, chest and legs and was hospitalized on heavy doses of antibiotics, pain management medication and IV fluids after the attack. Driver's injuries were thoroughly cleaned to ward off infection and increase skin regrowth, the shelter's Facebook page said. Later, Driver will receive laser therapy.

"Driver is resting comfortably and receiving many different treatments for his burns," said Abby Smith, the shelter's executive director.

The shelter cautioned that some fake GoFundMe pages have been set up in Driver's name, but there is only one legitimate one:

For anyone wishing to help support Driver's medical care, you can do so by clicking here and designating your donation to Driver's Fund: https://donatenow.networkforgood.org/FelinesAndCanines 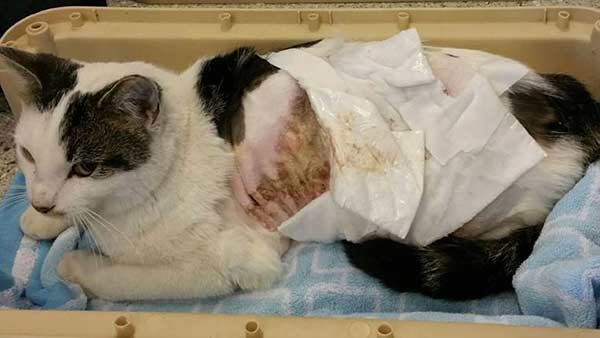