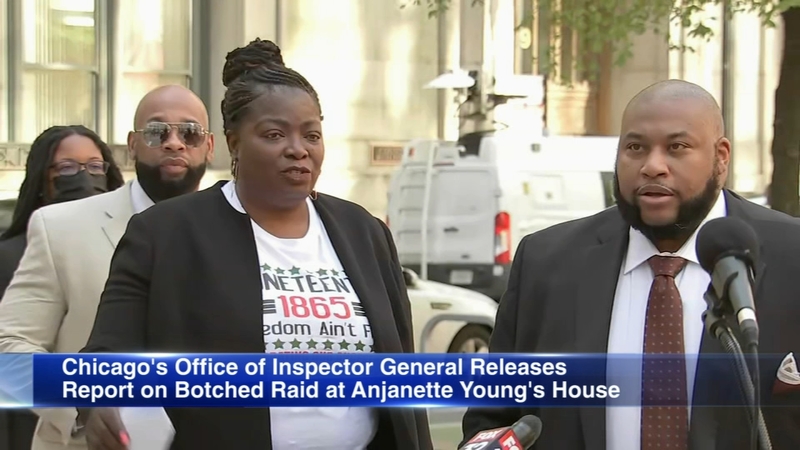 CHICAGO -- The city's Office of Inspector General has issued a scathing report of how the city handled the aftermath of the botched raid on the home of Anjanette Young.

Mayor Lori Lightfoot's office, the Chicago Police Department, the Civilian Office of Police Accountability and the city's Department of Law all receive harsh criticism in the OIG report.

"The investigation uncovered a troubling series of unfounded statements, internal and external disregard for the role and independence of COPA, and a [city Department of Law] team whose approach to the case led to conduct unbecoming in the form of disrespectful treatment of opposing counsel and the plaintiff," according to a statement from the OIG's Fourth Quarter 2021 report.

The inspector general's office said it reviewed "thousands of emails and documents" in putting together its 163-page report, of which only excerpts are included in this week's OIG release. The office said it interviewed 31 current and former city officials and employees.

Chicago police officers raided Young's home in February 2019, but it turned out to be based on false information that a male with a gun was living at that address. Young was made to stand naked in front of a dozen male officers.

A jacket was then placed around her shoulders for 13 seconds, followed by a blanket. Ten minutes into the raid, Young was allowed to get fully dressed after a female officer arrived on the scene.

"OIG's investigation revealed that city government failed to appropriately respond to a victim of a CPD wrong raid, failed to act with transparency in city operations and performed a series of governmental actions in a manner that prioritized communications and public relations concerns over the higher mission of city government," according to the OIG release.

Lightfoot initially insisted she knew nothing about the raid until local news media aired the video in December 2020.

After reviewing internal emails, the mayor has since admitted she learned about the raid in November 2019 when a top aide warned Lightfoot about a "pretty bad wrongful raid" by Chicago police.

"I have a lot of questions about this one," she wrote at the time to top aides.

"Regardless of whether the Mayor recalled these conversations or information, the release of a public and declarative denial of any prior knowledge of the Young raid by the Mayor's press office lacked the appropriate due diligence and fact-checking, and created an incomplete and inaccurate depiction to the public and the media of the city's prior discussions of the wrong raid," according to the OIG report.

The report also points out that "after learning details of the Young raid, numerous city employees failed to promptly report the raid to COPA. The raid occurred on February 21, 2019; yet no complaint was opened until November 12, 2019, nearly nine months later."

The report goes on to say: "Within days of the wrong raid, Young's pastor connected her via their phone with a CPD commander, who was apologetic but also defended the CPD members involved in the raid. Former CPD senior officials informed OIG that they became aware of the raid shortly after it ended because the same CPD commander had informed them about it. None of these CPD officials reported the wrong raid to COPA."

The report also blasts the city's law department for its handling of the settlement negotiations with Young's attorney, calling it "conduct unbecoming." At one point, after asking Young's attorney what it would take to settle the case, a city attorney responded in an email: "Defendants offer $0 to resolve this matter," according to the OIG report. During an interview with the OIG, one former city attorney likened Young's lawyer's behavior to a "public extortion campaign," according to the report.

The inspector general's office isn't recommending disciplinary action. Now-retired Inspector General Joe Ferguson said in October that he was unable to recommend disciplinary action against any city employees because a simultaneous, outside investigation requested by the mayor included interviews with 20 of those same city employees. Lightfoot's administration then claimed attorney-client privilege to shield that information from him, Ferguson said.

Young's attorney could not be reached for comment Friday. A spokesman for the Chicago Police Department referred a reporter to a CPD statement included in the OIG report that noted the department has since reformed its search warrant "processes."

The law department also plans to implement reforms, according to the OIG report. Lightfoot's office issued a statement included in the OIG report that reads in part: "OIG was and remains silent on its own role in handling Ms. Young's case," and "the fact that the OIG has opined about the conduct of other departments, but not itself undermines the legitimacy of the OIG and work on this matter and, we fear, other important OIG work."