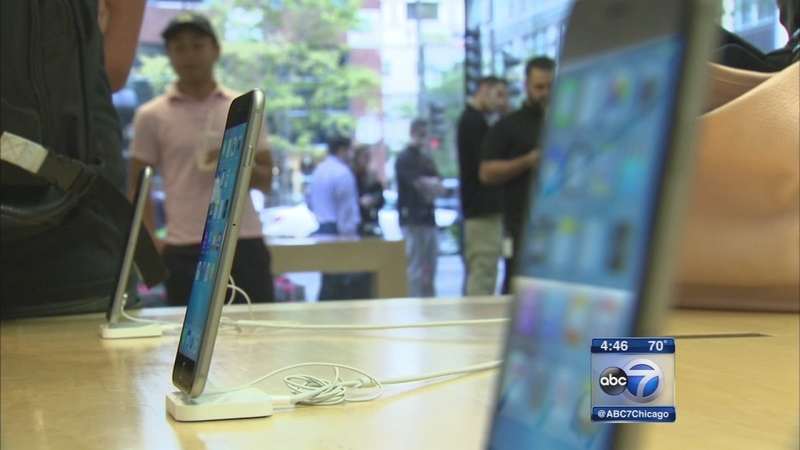 CHICAGO (WLS) -- It's become somewhat of annual tech rite - lining up for the next generation iPhone.

And in 12 countries, including the United States, Apple's next generation flagship device became available in stores Friday for the first time. Unlike other years, however, the lines weren't as long - and the anticipation not so high.

The Apple store on Michigan Avenue opened at 8 a.m. to start selling the iPhone 6S and 6S Plus - devices that look like what came before, but feature 3D touch (that gauges the user pressure on the screen) 4D video, front and back cameras and faster processors - all elements app and website developer Marc Cain says make being first in line worth it.

"This year we made up a game, everybody who came by asked the same question, 'Why do you wait in line? Don't you know you can order online?' So we tell them about a new secret product that hasn't been announced," Cain said.

About 50 people were waiting on the 6S. Some have done this before. And some just joined in as part of their Chicago experience.

"Actually standing in line for any of it, iPhones, I have never done that before," said Antonio Hendricks.

Apple expects to beat its sales records for the device that accounts for about 60 percent of company revenue.

And even if the mania isn't the same as, say, it was when the iPhone first came out, the shiny new thing doesn't fail to gratify.

"So I am a designer, I am interested to see how the force touch works - like what we can do with apps and stuff, I mean it opens up a new design lab for me basically - it makes our job a little more harder but fun!" said Maya Patterson.