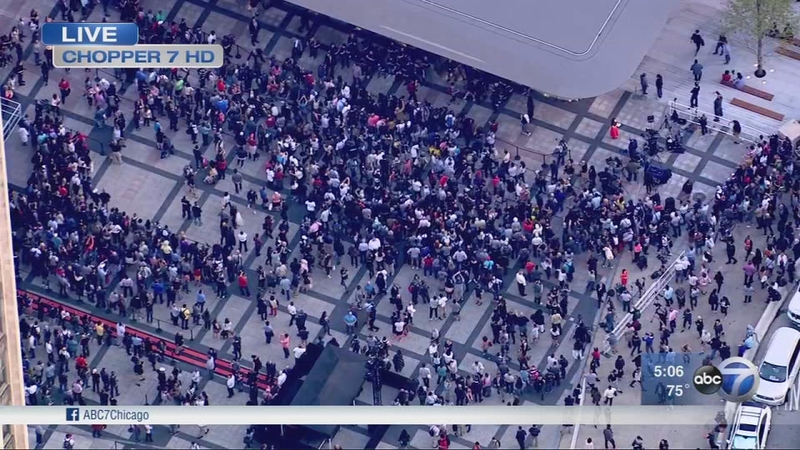 CHICAGO (WLS) -- Apple's new flagship opened Friday afternoon along the Chicago River, in a debut that has gained attention from across the nation and the world.

The party included a concert and special guests as customers browsed merchandise in the new space, which looks like a giant laptop from the outside.

Tech expert and macstories.net reporter John Voorhees said the roof was designed to echo the design of the lids of Apple's MacBooks.

"It incorporates a lot of elements we've seen in Apple Park in Cupertino, including the Steve Jobs Theater, in particular. It has the glass walls. It also has elements I've seen in the Union Square store in San Francisco. It's part of a redesign of flagship stores Apple's been rolling out across the world," Voorhees said.

There were long lines and a mad dash to be the first to check out the sleek interior. Apple's iconic long wooden tables feature iPhones, iPads, Apple watches and computers for sale.

"I think it's very exciting now that they took away all the stuff on the side. We can see what's inside the store rather than what's just on top," said Ike Nwankwo, who works nearby.

The 20,000-square-foot space incorporates a stairway from Pioneer Court down to the riverfront. There is no Genius Bar, but a Genius Gallery with trees and leather-top seating for waiting customers.

Hasem Bajwa, director of in-store programming, told ABC7 Eyewitness News the flagship is not thought of as a store, but an experience, with a focus on training customers on how best to use their products.

"We don't even call it a store anymore. We think of this as Apple Michigan Avenue. It's a place for the community to gather and be inspired and learn," Bajwa said.