They had said they would remain at the station until each protester had been released. However, the demonstrators left at approximately 10 a.m. Monday after police told them everyone who was going to be released had been released already.

The protesters were taken into custody following protests near McCormick Place and the Art Institute Sunday.

Outside the Northwest Side police station, it was an all-night affair. Protesters brought sleeping bags, blankets and chairs. Cheers went up from gathered loved ones, friends and lawyers when protesters were released . Police officers stood guard around the station, which had been fenced off, to prevent anyone from getting in the front doors. Hundreds of demonstrators were gathered at some points.

"It feels good. you know, I didn't think there would be anybody out here," freed protester Justin Crumbley said.

About 20 people were released overnight Sunday into Monday. Their charges range from crossing a police line to disorderly conduct.

Mir Iqbal, who says he was charged with criminal trespassing in Sundays confrontation with police, was nursing some minor injuries Monday.

"I have a kind of some scraping on my ear. I think I have kind of a shiner going," Iqbal said.

"We have over two dozen injuries documented, thus far. We expect more. Most of them are from baton strikes," said Sarah Gelsomino of the National Lawyers Guild, the group that is representing many of the protesters. "We saw a lot of very serious violence last night by the police against the protesters."

The demonstrators outside the police stations conducted what they called 'jail support,' passing out clothes, food and cigarettes to the newly freed.

During the heated confrontation Sunday, some demonstrators threw bottles, paint and other objects, including some of the crowd control barriers at the police line.

Two protesters appeared in Cook County Court Monday morning and were slapped with bonds of $150,000 to $200,000 for their alleged part in the protests

Raziel Azuara, 22, was charged with aggravated battery against a police officer for allegedly throwing a red-paint-filled light bulb at police holding the east line at Michigan and Cermak around 6:45 p.m. Sunday. Prosectors say it bounced off the helmeted head of an officer and hit another. Azuara has been convicted for misdemeanor vandalism and tagging charges before.

And from a skirmish later Sunday night in the loop, 19-year-old Yonte Harris was charged with shoving a bike cop with another bike and received the higher bond from judge Israel DeSierto due to the action resulting in a injury to the officer.

Chelsey Sprengler says she was arrested for a failure to disperse after the conflict.

"We sat down on the ground to not move on the sidewalk, and finally, the police took me and another man who were the last two people sitting there and pulled me away by the hair down the street and then put me in handcuffs," Sprengler said. "I have never been arrested before and going through that experience was scary. I felt alone, I felt violated for reasons I wasn't sure why. Was it worth it? Yeah, absolutely, I wouldn't regret any of it."

"If you think it's easy to ask people... to do what they did, it's not. Asking people to put themselves in harm's way, knowing that they are going to get assaulted and be able to stand there and take it...these guys were amazing," said McCarthy.

The crowd near McCormick Place eventually heeded the police command to disperse. Later, they marched through the Loop en masse. At one point, as the rain came pouring down, they danced and chanted in front of the Art Institute, where Michelle Obama and other dignitaries were having an event.

One thing that was clear Monday was that some of the demonstrators were worn out -- freed protesters and supporters alike. They've been going for days on foot and with little sleep, as have the Chicago police officers who have the task of keeping the peace.

"I am tired, but I know people will be here until the last person's gone," said Massoglia.

McCarthy says at least four officers have been hurt in protests so far. Some of them have bumps and bruises, and one officer was stabbed in the leg. None of their injuries are life-threatening. 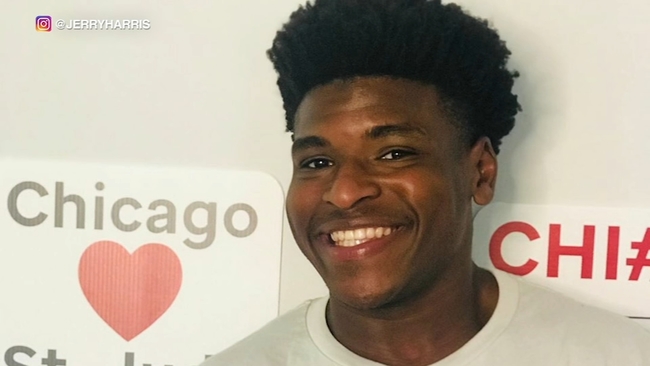