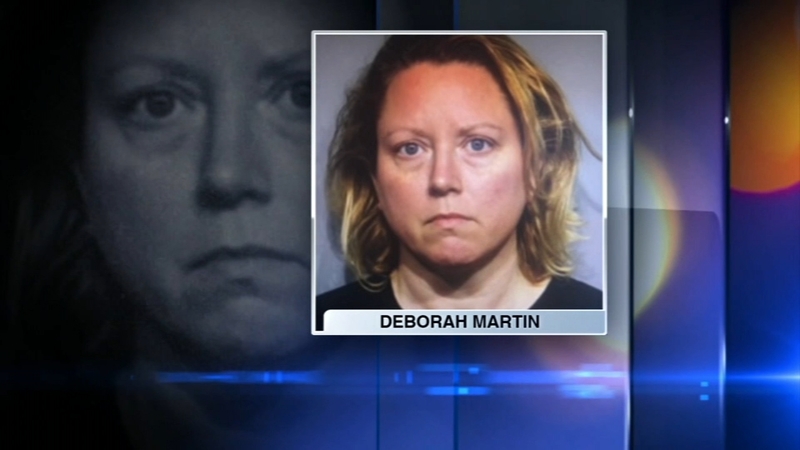 ROLLING MEADOWS, Ill. (WLS) -- A 43-year-old Arlington Heights woman has been charged with murder after police said she stabbed her parents to death.

Deborah Jane Martin stood up in court Monday afternoon as prosecutors detailed what they called the bone-chilling 911 call that led police to an Arlington Heights home just after midnight on Saturday.

Officers received the call about 12:30 a.m. Saturday from the first block of South Derbyshire Lane, but the person on the other line did not say anything discernible, according to a statement from Arlington Heights police.

"The 911 audio captures the defendant's mother gasping for air and moaning. Within seconds of dispatch answering, sounds of movement are heard followed by the mother of the defendant gasping and pleading, 'No Debbie,'" said Lorna Amado-Chevlin with the Cook County States Attorney's Office.

Her father David was apparently stabbed in his recliner and had his throat slashed. Anne, her mother, was stabbed at least seven times and called 911. Both had apparently tried to crawl to an exit.

"Her dying gasps and moans are heard throughout the duration of the call," Amado-Chevlin said.

Police responded to the home and found a man and woman dead. While attending to the victims, police said they were confronted by Martin, who was coming down the second floor stairs.

"The journal excerpts included multiple entries including her intent to kill her parents, one as recent as June 2, 2019 - just days before this horrific murder," said Amado-Chevlin.

Prosecutors offered no motive for the murders in court.

The victims were identified to the Cook County Medical Examiner's Office as 71-year-old Anne Martin and her husband, 72-year-old David Martin. Both of their deaths were ruled as homicides by the medical examiner's office.

Arlington Heights Police told ABC 7 the Martin home was familiar to their department. Commander Joe Pinnello said AHPD had responded to "more than a couple" calls there over "several years" because of a "family situation" involving the Martins' daughter, who had been living with her parents on and off for years. However, Deborah Martin did not have a criminal record.

Neighbors who did not wish to talk on camera said they had a grandchild and often walked their dog in the neighborhood.

School District 214 confirmed Anne Martin was an English Learner and Social Science teacher at Wheeling High School from August 1995 through June 2014 and she was still substitute teaching there as recently as this past school year. Prior to that, she worked as a resource assistant at Prospect High School from August 1988 until June 1992. The Daily Herald reports that the couple had two adopted children, three step grandchildren and a grandchild.