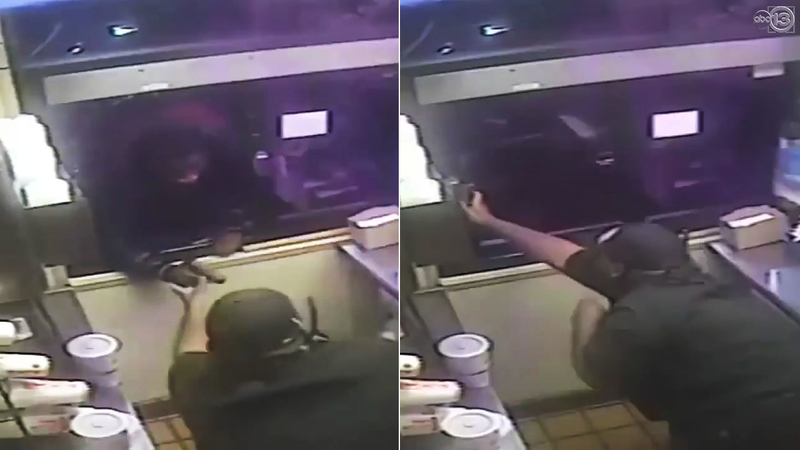 HOUSTON, Texas -- The instincts of a Burger King worker kicked in when he was confronted by an armed robber who was trying to get into the restaurant through the drive-thru window.

On Tuesday, Houston police released security video of the ordeal that took place around closing time on Aug. 11.

Worker Matthew Linscomb recalls to ABC13 Eyewitness News that he was taking orders that night like usual.

"I got a customer in. Take the order like any other normal thing," Linscomb remembered.

It would have been his last drive-thru customer of the night, but it turned out to be an unforgettable one.

"As soon as I opened the window, I look at the guy and he points the gun right at my face," he recalled. "He said, 'Get back, step back.'"

In the video, without hesitation, Linscomb lunges forward and pushes the armed man from the window.

"When it was over, my heart was pounding. I thought I was gonna drop dead right there," he said.

In the same breath, though, he said, "I didn't wanna be a victim...So when I saw an opportunity - he was getting stuck - I just took it."

HPD is hoping the public recognizes the suspect. Anyone with information is asked to call Crime Stoppers at 713-222-TIPS (8477) or submit tips at crime-stoppers.org.