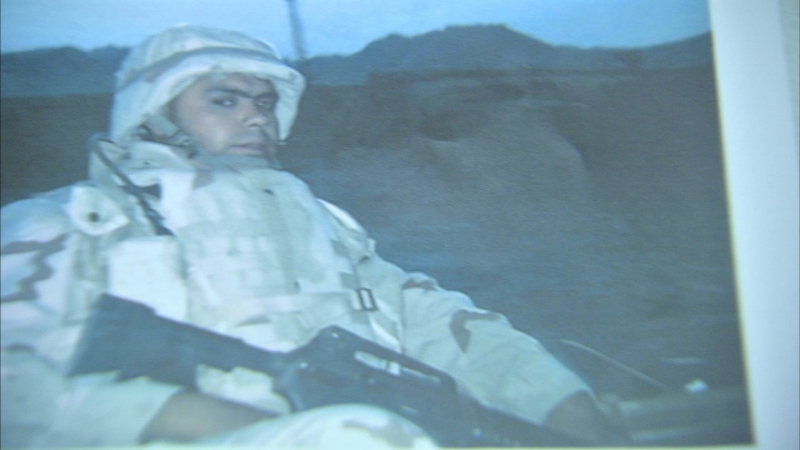 CHICAGO (WLS) -- An Army veteran who served two tours of duty could be deported as soon as next week.

On Thursday, his parents joined with members of Rainbow Push and called for help to keep their son here.

Miguel Perez, Sr., and his wife Espranza said they have a lot to be grateful for this Thanksgiving although their son, Gulf War veteran Miguel Perez, Jr., could be deported soon.

"It's very hard for us," said Esperanza Perez, Miguel's mother.

Perez is one of the thousands of so-called green card soldiers, undocumented immigrant men and women who served in the American military, but still face deportation.

Relatives say the 36-year-old has lived in the Chicago area most of his life and is father to a 18-year-old daughter and a 12-year-old son, who are both born U.S. citizens.

His family pleaded his case while attending the Rainbow Push Thanksgiving Day dinner for veterans, their families, the homeless and anyone else in need of a hot meal.

"He offered his life for this country for this nation and he has a right to live in the country that he fought for," said Miguel Perez, Sr.

Miguel's parents said his troubles began after he returned home after completing two tours of duty overseas. They said after being diagnosed with PTSD, their son had a hard time finding a job.

That's when he got mixed up with the wrong crowd and was eventually convicted and sentenced for selling drugs.

Before he could be released from prison, Perez was detained by immigration officials who revoked his legal resident status and started the process to deport him.

"You can't add separating him from his whole family, his son, the only community he's ever had and the country that he's served for," said Rev. Walter Coleman, a community activist.

The Perez family just wants their son to be able to come home.

"I love my son. He fought for this country. I think it's not fair," said Esperanza Perez.

A hearing on Perez's status is scheduled for the first week in December. His parents hope that support for him will not only lead to his release, but also, to citizenship for their son.

A spokeswoman for the office of U.S. Immigration and Customs Enforcement released a statement in response saying, "Miguel Angel Perez-Montes, 38, from Mexico, was convicted in February 2010 in Cook County, Illinois, for manufacture/delivery of more than two pounds of cocaine and sentenced to serve 15 years in the Illinois Department of Corrections. He was encountered by ICE while serving his prison sentence and placed into removal proceedings in 2012. On Sept. 23, 2016 Perez-Montes was turned over to ICE custody from the Hill Correctional Center in Galesburg, Illinois. He will remain in ICE custody while his removal proceedings are pending in federal immigration court.

ICE respects the service and sacrifice of those in military service, and is very deliberate in its review of cases involving U.S. military veterans. Any action taken by ICE that may result in the removal of an alien with military service must be authorized by the senior leadership in a field office, following an evaluation by local counsel. ICE exercises prosecutorial discretion, when appropriate, on a case-by-case basis for members of the armed forces who have honorably served our country. ICE specifically identifies service in the U.S. military as a positive factor that should be considered when deciding whether or not prosecutorial discretion should be exercised. Still, applicable law requires ICE to mandatorily detain and process for removal individuals who have been convicted of aggravated felonies as defined under the Immigration and Nationality Act."
Related topics:
veteransdeportation
Copyright © 2021 WLS-TV. All Rights Reserved.
TOP STORIES
Security guard rescued after falling into 15-foot hole in Aurora
Stan Bowman out as Hawks GM, team fined $2M after sex assault probe
Lisle HS teaching assistant went on racist rant, student says
Boy killed after chasing soccer ball into Chicago Heights street
Men Kyle Rittenhouse shot can be called 'rioters,' but not 'victims'
2022 Grammy's: R Kelly can keep past music awards for now, CEO says
Chicago woman sentenced in kidnapping plot against romantic rival
Show More
Suspect in attempted car theft arrested after returning to scene
Teen boy seriously hurt in Loop Red Line stabbing: CPD
Tattoo artist Kat Von D closing Los Angeles shop, moving to Indiana
TX mother, boyfriend arrested in case of 8-year-old's decomposing body
US issues first passport with 'X' gender marker
More TOP STORIES News