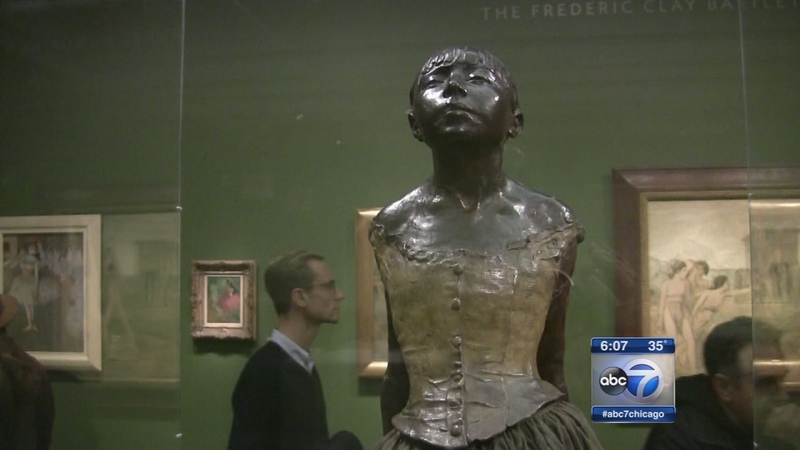 CHICAGO (WLS) -- There are allegations of forgeries on display at the Chicago Art Institute one of the city's most popular attractions and one of the top museums in the world.

This illusion of reality involves the Chicago exhibition of legendary artist Edgar Degas. His paintings are on display right now at the Art Institute along with the famous 19th century artist's bronze sculptures.

"These mixed media models were falling apart after his death, they were reconstructed posthumously, parts put back together. He made those exclusively for his paintings and pastels so he could work out logistics of composition and color," says critic Gary Arseneau.

After Degas' death in 1917, his relatives hired a company to create bronze masters of his of cork, wax and clay sculptures, then made multiple copies from each master. After they were bronzed, Degas' signature was added to many of them.

"They inscribed his name giving the illusion he created it, much less approved it when in fact he has never even seen it," Arseneau says. "All Degas bronzes are non-disclosed second to third generation forgeries with counterfeit signatures and bogus editions."

The Art Institute declined our request to answer questions about whether this exhibit misleads the public.

A Degas expert says the artist himself wouldn't be happy with this and wouldn't want the public see sculptures in his name.

"No absolutely no, he's on the record as saying absolutely not," says Gary Tinterow. "When dealers and friends would come by and say you really should cast these in bronze he said 'no, no, no. Bronze is for the ancients, bronze is too permanent. What I love is the malleability of these works'."

Since the controversial Degas bronzes were made, there have been new ethical guidelines established by art industry associations, groups that list Chicago's Art Institute as a member. Those guidelines state renditions that are not authorized by the original artist, and in a form the artist never used, should be considered unethical.