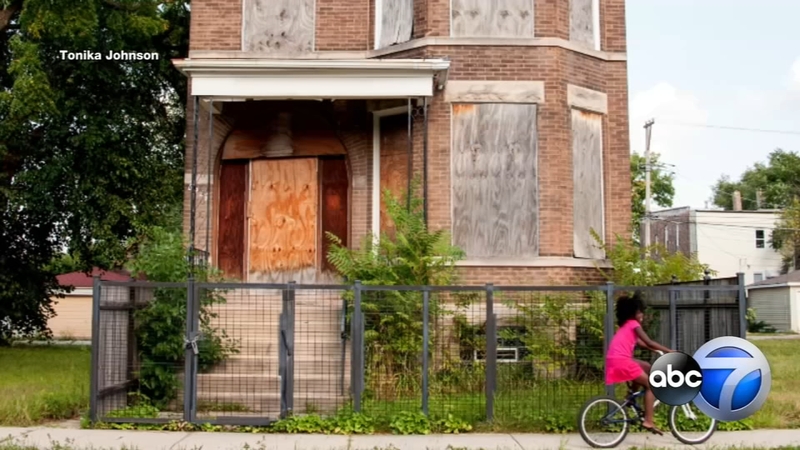 CHICAGO (WLS) -- "One is not lived in, has been boarded up for a while and one is very much lived in," remarked Chicago artist Tonika Johnson, looking at two homes-one from the Southside and the other from the north.

This is the reality she sees: a place where decades of segregated living have created separate worlds within one city. She pointed out the disinvestment on the Southside and flourishing neighborhoods just miles north; blacks and whites largely living apart.

It's a complex problem illustrated in a surprisingly simple way, through Johnson's new "Folded Map" exhibit at the Loyola University Museum of Art. The installation features images of Southside homes and those at addresses of roughly the same block number on the Northside; a comparison that is hardly a mirror image.

"This is what residents on the south Paulina Street have to live with and accept that's on their block," said Johnson of a boarded up home, the fence locked shut as a young girl rides by on her bicycle.

Johnson's witnessed this divide since childhood, growing up in Englewood while going to high school roughly 15 miles north in Avondale.

"That's when it really became kind of clear to me that these streets are the same, however the environment, everything else is different," she recalled, adding "I really wanted to bring the conversation back to the elements that created those conditions."

Among those, Johnson explained, were policies that blocked African American communities from getting mortgages and loans to start businesses and buy homes.

The independent Metropolitan Planning Council says the Chicago region has some of the highest levels of economic and racial segregation in the country. The council estimates hundreds of lives and billions of dollars of income are lost as a result.

"You can't fault someone who lives on the Northside and has been told to never come to the Southside and just doesn't and you can't fault someone who's from the Southside who may feel like they don't belong in a Northside neighborhood," said Johnson, adding, "It perpetuates stereotypes that we all have. And 'Folded Map' kind of breaks that cycle for a second to allow residents to really talk about their own neighborhoods and together question the larger systemic issues of why is it that only this particular race lives in this neighborhood and why is it that homes on this particular side of town consistently cost lower over decades."

Johnson brought some of these "address twins," as she calls them, together and shares their conversations in her new exhibit.

The displays are interactive too. You can mark your own address on the map and find your address twin on the other side of the city.