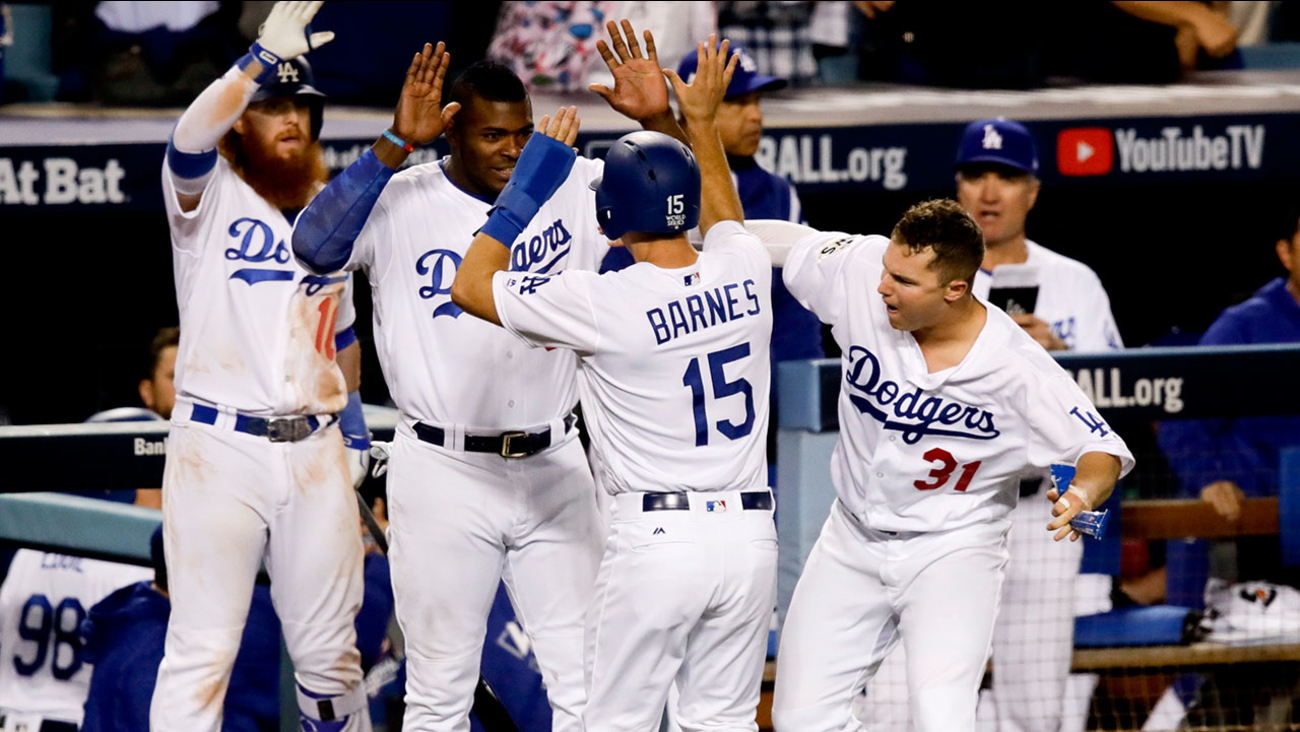 Dodger Austin Barnes celebrates after scoring on a double by Chris Taylor during Game 6 of the World Series against the Houston Astros Tuesday, Oct. 31, 2017, in Los Angeles. (AP Photo/Alex Gallardo)

LOS ANGELES -- The Dodgers kept their World Series hopes alive with a crucial 3-1 win over the Astros in Game 6, sending the series to a final deciding matchup before the home crowd Wednesday.

Los Angeles is hoping for its first World Series win since 1988, while Houston is seeking its first-ever.

Game 6 started with a little less firepower than the epic Game 5 that saw a combined 25 runs, including seven home runs, in 10 innings.

The Dodgers' scoring Tuesday started in the sixth inning with an RBI single by Chris Taylor and a sacrifice fly by Corey Seager. A solo home run by Joc Pederson off Joe Musgrove put the Dodgers up 3-1 in the seventh.

Rich Hill started on the mound for the Dodgers, but manager Dave Roberts pulled him with the bases loaded and two outs in the fifth. Hill had given up Brian McCann's leadoff single and Marwin Gonzalez's ensuing double, but then struck out Josh Reddick and Justin Verlander to get to the brink of escaping the jam.

Instead, Roberts ordered an intentional walk for George Springer and then came out to pull Hill, who appeared to turn his back on the manager. Hill then went to the dugout and furiously swatted cups off the Dodgers' cooler, sending them flying.

But reliever Brandon Morrow, pitching for the sixth time in eight days, calmly ended the rally with a groundout from Alex Bregman. Morrow has appeared in all but one of the Dodgers' 14 postseason games, and he was battered in Game 5 in Houston.

Kenley Jansen closed out the game in the ninth.

Dodgers fans told Yuli Gurriel just what they thought of him during the game.

Dodger Stadium ferociously booed the Houston first baseman during pregame introductions, and it got much louder during his first at-bat in the second inning. Dodgers starter Rich Hill even stepped off the rubber before his first pitch to Gurriel, allowing the booing to increase.

The choruses of boos only changed into a raucous cheer when Gurriel fouled out.

Dodgers fans clearly were disgusted by Gurriel's behavior during Game 3 in Houston. While speaking with teammates, the Cuban made a blatantly racist gesture and used an offensive Spanish term to refer to Los Angeles starter Yu Darvish, who is Japanese.

Gurriel apologized in a statement afterward, but wasn't suspended by MLB until the regular season of 2018.

The Dodgers brought out some star power before the game.

Throwing out the ceremonial first balls were longtime manager Tommy Lasorda and former ace Orel Hershiser. The 90-year-old Lasorda, a lefty who pitched for Brooklyn, underhanded his toss home. Lasorda was the skipper and Hershiser was the ace when the Dodgers won their last championship in 1988.

Legendary retired Dodgers broadcaster Vin Scully was also spotted in a box suite and Sandy Koufax was in the stands.

Waving big blue flags on top of the Dodgers' dugout were Ashton Kutcher and wife Mila Kunis. On top of the Astros' first base dugout were Kareem Abdul-Jabbar and Rob Lowe.

Other celebs in the crowd included television hosts Mary Hart and Larry King.