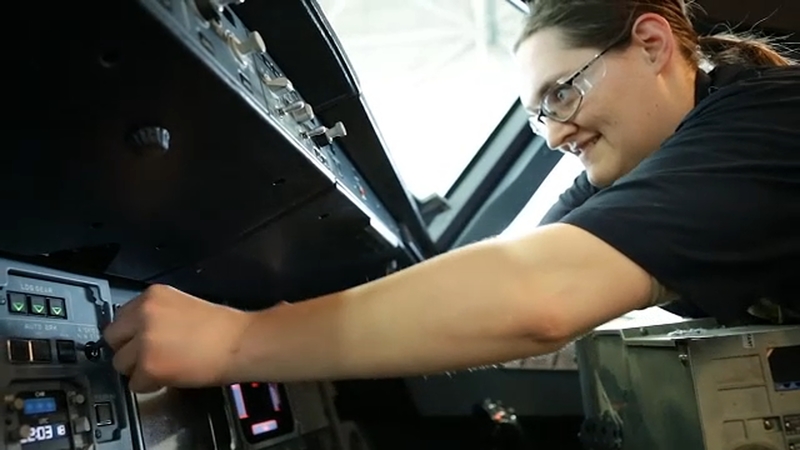 CHICAGO (WLS) -- A college degree is no guarantee that a graduate will get a job, but City Colleges of Chicago is trying to give their students an advantage by preparing them for jobs that are in demand.

"To me, this is a huge opportunity. There are not a lot of job opportunities for people my age," he said.

And now he and others like him could get some help fulfilling their dreams because of a new partnership between the City Colleges of Chicago and Chicago area-based aviation corporation AAR.

"We can enter into a career and earn a living wage with four months of preparation," City Colleges of Chicago Chancellor Juan Salgado said.

The effort looks to train students in sheet metal work and airplane maintenance for in-demand jobs in aviation and other fields like heavy manufacturing, boating, automotive repair, and HVAC. According to a study by a major aircraft manufacturer, there's a shortage of nearly 190,000 aircraft mechanics in North America alone.

"These are great jobs. After a few years of training without a 4 year degree you can have a job that's in demand and pays about 80k a year," said John Holmes, president and CEO of AAR.

The global aerospace and defense company plans on donated three training planes to the new educational initiative to be headquartered at the Olive-Harvey College Transportation Center.

"We live in a time where you earn what you learn," Mayor Rahm Emanuel said.

The plan is a part of AAR's Eagle Career Pathway Program, which the company has already started in other schools near its five U.S. aircraft repair stations.

Tammera Holmes of the Aerostar mentoring program said it's great for young women, blacks and Latinos looking to get into the field of aviation.

"What I'm so excited about today is we're introducing a lot of people to the technical careers behind aviation," she said.