Many baby formula plants weren't inspected because of COVID

The gap in baby formula plant inspections is getting new scrutiny from Congress and government watchdogs.
AP
By Matthew Perrone, AP Health Writer 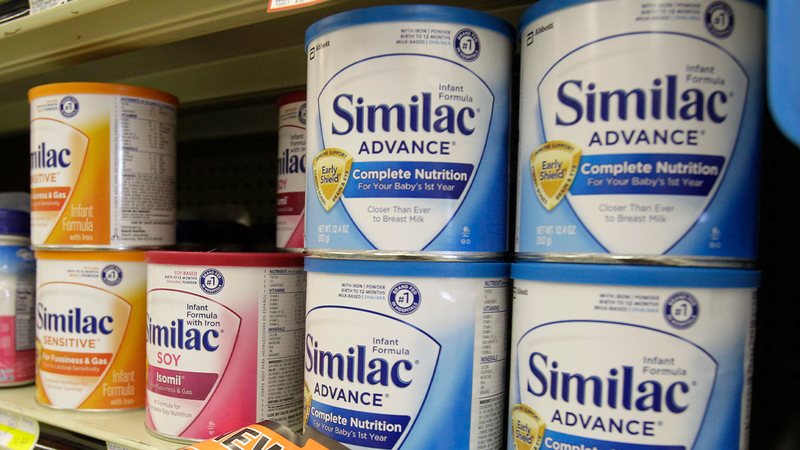 Abbott, FDA were warned about formula plant a year before recall

WASHINGTON -- U.S. regulators have historically inspected baby formula plants at least once a year, but they did not inspect any of the three biggest manufacturers in 2020, according to federal records reviewed by The Associated Press.

When they finally did get inside an Abbott Nutrition formula plant in Michigan after a two-year gap, they found standing water and lax sanitation procedures. But inspectors offered only voluntary suggestions for fixing the problems, and issued no formal warning.

Inspectors would return five months later after four infants who consumed powdered formula from the plant suffered bacterial infections. They found bacterial contamination inside the factory, leading to a four-month shutdown and turning a festering supply shortage into a full-blown crisis that sent parents scrambling to find formula and forced the U.S. to airlift products from overseas.

The gap in baby formula plant inspections, brought on by the COVID-19 pandemic, is getting new scrutiny from Congress and government watchdogs investigating the series of missteps that led to the crisis. A recent bill would require the Food and Drug Administration to inspect infant formula facilities every six months. And the government's inspector general for health has launched an inquiry into the FDA's handling of Abbott's facility, the largest in the U.S.

Abbott has restarted production at the Michigan baby formula factory that has been closed for months due to contamination, the company said Saturday.

Abbott resumed production at the plant early this month under a legally binding agreement with the FDA, but the shutdown and nationwide shortage exposed how concentrated the industry has become in the U.S., with a handful of companies accounting for roughly 90% of the market.

As COVID-19 swept across the U.S. in early 2020, the FDA pulled most of its safety inspectors from the field, skipping thousands of routine plant inspections.

The FDA did conduct more than 800 "mission critical" inspections during the first year of the pandemic, the agency said in a statement. Regulators selected facilities for inspections based on whether they carried a specific safety risk or were needed to produce an important medical therapy.

The first batch of imported baby formula under "Operation Fly Formula" arrived in the United States on Sunday as the Biden administration tries to alleviate the nationwide baby formula shortage.

Only three of the nation's 23 facilities that make, package or distribute formula made the cut. The FDA resumed routine inspections in July 2021.

The inspection records reviewed by the AP show gaps as large as 2 1/2 years between FDA's 2019 inspections and when regulators returned to plants owned by the three leading formula manufacturers: Abbott, Reckitt and Gerber.

In fact, the FDA still has yet to return to one key plant owned by Reckitt and two owned by Gerber, according to agency records. All those facilities are operating around the clock to boost U.S. formula production.

"The FDA would have had more chances to catch these issues if they'd been inspecting during the pandemic," said Sarah Sorscher, a food safety specialist with the Center for Science in the Public Interest. She acknowledged the difficult trade-off the FDA faced in pulling its inspectors to reduce their exposure to COVID-19. "Certainly there was a price to pay for protecting their workers during that time."

Baby formula manufacturers were "consistently identified as a high priority during the pandemic," and there is currently no backlog of inspections, the agency told the AP in response to inquiries about the gaps. The agency said it skipped about 15,000 U.S. inspections due to COVID, but it has already made up about 5,000 of those, exceeding its own goals.

The Federal Trade Commission is urging consumers to beware of online scammers using the baby formula shortage to take advantage of desperate parents.

Under current law, the FDA is only required to inspect formula facilities every three to five years, but the agency has consistently inspected facilities annually - until the pandemic.

"Our top priority now is addressing the urgent need for infant formula in the U.S. market, and our teams are working night and day to help make that happen," FDA stated.

But outside experts say the gap in inspections speaks to a blind spot in the government's response effort, which was successful at preventing shortages of drugs and other medical supplies.

FDA Commissioner Robert Califf says regulators knew shutting down Abbott's plant would create supply problems, but there was little evidence of urgency between when inspectors shuttered the plant in February and recent emergency measures to allow more imports from abroad.

Longtime food safety specialists see a deeper problem at the highest levels of the FDA, where physicians and medical scientists for decades have prioritized oversight of drugs and medical products over food.

"It's very challenging for them to get engaged at all in this area because they don't have the background, the knowledge and the experience in it," said Steven Mandernach, executive director of the Association of Food and Drug Officials, which represents state-level inspectors.

There's no certainty that extra inspections during COVID-19 would have prevented the contamination problems at the Sturgis, Michigan, plant that was shut down. And Abbott says that its products have not been directly linked to the infections, two of which were fatal.

But the plant did have earlier problems, including a 2010 formula recall due to possible contamination with insect parts.

"I think facilities that had known problems that could cause a food safety risk should have been part of FDA's mission critical work," Mandernach said. "And this facility would have been among those."

Not having regular inspections - or even the threat of them - can lead to changes in culture at plants like Abbott's, Mandernach noted.

"If you're driving down the highway and you know the state troopers have been furloughed, might you go a little faster than if you knew there was a trooper on duty?" Mandernach asked.