VIDEO: Deputies race to save newborn who stopped breathing at Oregon mall

"You can't describe what it's like to see your child turn blue and not really know how to help or what the hell is going on."
By CNN 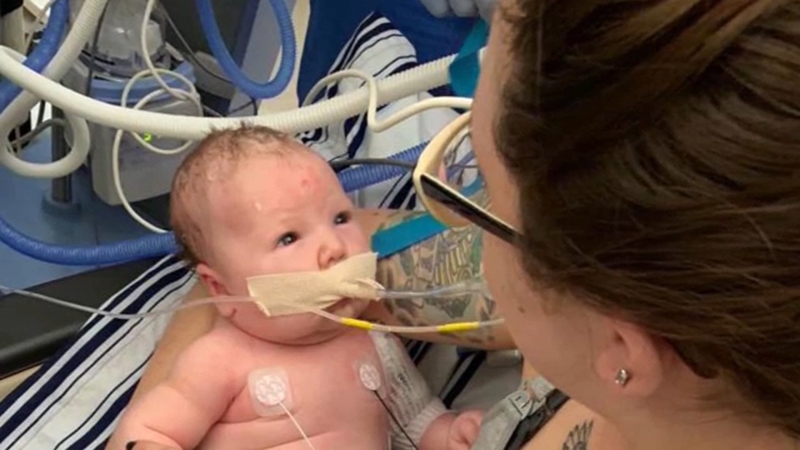 Video: Deputies race to save baby not breathing

HAPPY VALLEY, Ore. -- Parents from Oregon City said Clackamas County sheriff's deputies saved their daughter's life. She was only a week old when she stopped breathing on a trip to the mall.

The family came to JCPenny to get pictures of their newborn baby girl. But they didn't make it that far.

She stopped breathing while they were feeding her. What happened next deputies said was nothing short of a miracle.

"I moved her out from under her blanket and she was a different color," Audrey's mom Jessie Siefer said.

For Jessie Siefer and Kaylob Harmon it felt like slow motion.

"I wouldn't wish that on my worst enemy," Harmon said.

The surveillance video showed how fast it really happened. Their week-old daughter Audrey Harmon stopped breathing while they were at the mall.

"We really thought she was dead at the time," Deputy Jonah Russell said.

"I just wanted to do whatever I could to give her a chance," Deputy Jonathan Zacharkiw said.

Three Clackamas County sheriff's deputies happened to be within one block of Clackamas Town Center when the 911 call came in.

They said never before have they been in this situation with an infant, but their training took over as a team, they held her head up, did CPR, cleared Audrey's airways and kept her alive until the paramedics came.

"This call was the most painful and most rewarding call at the same time that I've ever had in my entire life," Zacharkiw said.

"Luckily we were where we were. Had this happened at home, it probably would have been an entirely different story," Harmon said.

Baby Audrey has been at Doernbecher's for more than a week now and over the weekend, she had some visitors.

"Man I lit up cause she opened her eyes which I was not expecting and she looked right at me," Russell said.

Her parents said she's doing a lot better, they don't know yet what the future holds or when she might be released.

But she can expect more visits from her heroes in the days to come.

"She wouldn't be here without them...I hope she knows them for the rest of her life," Harmon said.

Her parents and the deputies said they're just grateful she's still here.

Tuesday evening, baby Audrey started breathing on her own again for the first time in more than a week.

The deputies think she choked while she was feeding. But the doctors are still figuring out what exactly happened.