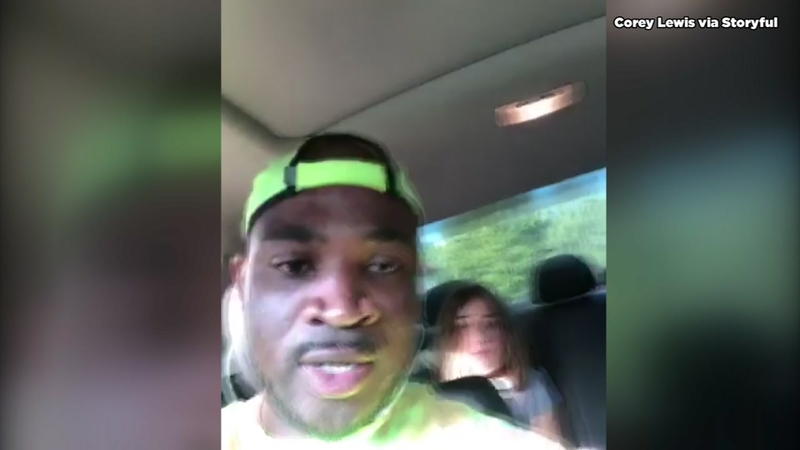 Man says he was questioned by police while babysitting white children

MARIETTA, Georgia -- A black man in Marietta, Georgia, who was babysitting two white children said a woman followed him and reported him to the police.

Corey Lewis said he was outside a Cobb County Walmart with two white children under his care when a woman approached him and "asked to speak to the little girl." He said the woman threatened to take down his car registration and then followed him to his home.

In videos live-streamed to Facebook, a police officer arrives at a residential street, which Lewis said was his home, and asks for the children, ages 6 and 10, to step out of the car.

The girl explains to the officer that Lewis was babysitting them when a white woman started to follow them.

Lewis is heard saying, "It's 2018 and I can't even step out into the community without being profiled."

After speaking with the children, the officer left the scene.

The couple who hired Lewis told ABC News they were in shock about the incident.

Appearing on "Good Morning America," David Parker and Dana Mango said they were at dinner when Lewis called and told them about the incident.

"It truly took me several minutes to believe that it was real. I was just in a state of disbelief," Mango said.

Mango said the officer was apologetic once he realized what was happening. Mango said the children were scared for Lewis when he was being questioned.

Mango explained to GMA that Lewis is a family friend and their son attends his youth program. She said Lewis has picked up her son from school for two years and babysits him until she gets off work.

When Lewis went to a wedding for a week, Mango said every day, her son "asked when he was coming back."

Parker said he guesses "B-W-B is the new thing, babysitting while black."