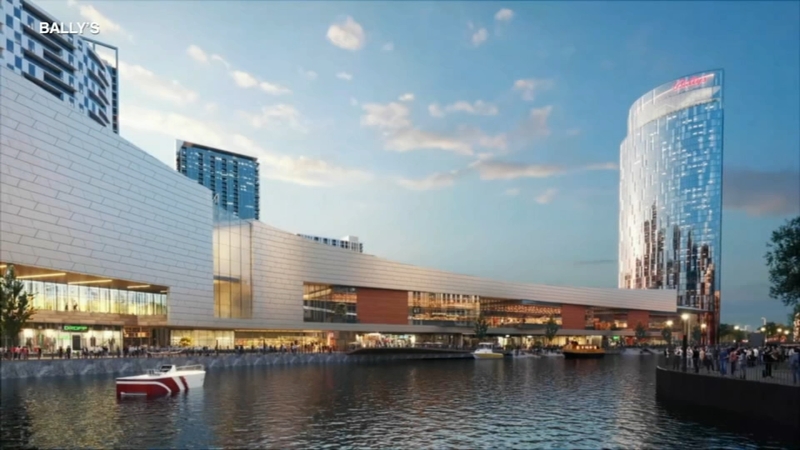 CHICAGO -- The hedge fund owner whose East Coast corporation is poised to break ground on Chicago's first casino pledged Thursday "to keep our promises" to neighbors of a massive gaming complex in River West - but a room full of skeptical residents pushed back on a proposal they worry will increase traffic and crime.

Soo Kim, CEO of Bally's Corp., joked that after gaining Mayor Lori Lightfoot's backing to build a casino at Chicago Avenue and Halsted Street, "it would be easier for me to be hiding in some dark, smoky room.

"I'm here in person telling you that we're going to keep our promises," Kim said during a public meeting at the University of Illinois Chicago on the mayor's casino choice. "We negotiated this proposal - which was accepted by the city - very intentionally,"

"My primary responsibility is to protect money and make it grow. That's my job. But I believe that there's a way to do that, and yet do that the right way, and make a good impact."

But a parade of residents lamented anticipated increases in crime they expect the casino to bring to the busy stretch near the Chicago Tribune's Freedom Center printing plant, which will be demolished to make room for the casino if Lightfoot's pick receives City Council and state approval.

"I was beyond shocked when I learned that Mayor Lightfoot approved the casino proposal in this residential area," said one condo owner. "Casinos simply do not belong in residential areas, period."

"I'd ask anyone on the panel to give them one casino site anywhere in the world that has improved public safety," another one of Bally's possible future neighbors said.

"The more eyes and ears, the more visibility that you have around a facility, it can translate to more safety," he said.

Bally's and the city officials who have backed them are sure to face more scrutiny in the weeks ahead as the $1.7 billion plan moves through the City Council.

Lightfoot abruptly named the publicly traded Rhode Island corporation the winner of Chicago's gambling resort sweepstakes over two other finalists last week, after just one meeting was held by a special City Council committee the mayor had appointed with the stated purpose of handling "all matters" related to the casino.

Lightfoot's office also announced a major last-minute change to the Bally's proposal moments before the celebratory news conference trumpeting the selection last week. City officials revealed the temporary casino would be housed in the landmark Medinah Temple while construction is completed on the main site.

The plan that was originally presented to neighbors at a public meeting last month called for the temporary site to launch on the Tribune property.

Downtown Ald. Brendan Reilly (42nd) - who has emerged along with Ald. Brian Hopkins (2nd) as Bally's biggest City Council opposition - derided that "switcheroo" placing the temporary site in his ward.

"We're being told that if we don't approve this soon, that we will have no choice but to raise property taxes, [but] we've been receiving this kind of drip-drop of information from the administration. ... We are being asked to review something that is literally being changed as we go," Reilly said earlier this week during another meeting of the special casino committee, which has yet to take any action.

Ald. Walter Burnett, whose 27th ward includes the final casino site, has thrown his full support behind the proposal, siding with Lightfoot's claim that the alternative would be a property tax hike. The city's cut from the casino is earmarked for nearly insolvent police and firefighter pension funds.

Lightfoot has brushed aside critics accusing her of trying to fast track her preferred pick through the Council, and then on to the Illinois Gaming Board, which has the final say on issuing a casino license.

Jennie Huang Bennett, the city's chief financial officer, pushed back against the claim that Lightfoot went around a special committee that critics argue was formed to create an illusion of transparency.

"The City Council doesn't actually ever make a selection for any procurement process that the city ever does," Bennett said. "The city actually engaged the committee in advance of the selection as a measure of transparency in order to ensure that they are more informed of that process."

City officials are aiming to advance Bally's proposal to state regulators by this summer.

Lightfoot, who's out of town this week, appeared in a brief video played at Thursday's meeting, saying, "We may not be able to calm all of your concerns, but we are confident that this casino will not only benefit our entire city, but you as well."