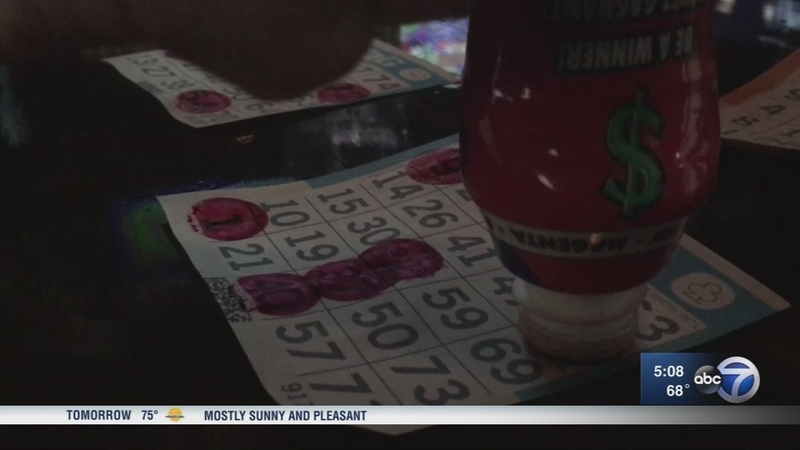 CHICAGO (WLS) -- It's called "bar bingo," and patrons and bars are cashing in... but is it legal? The I-Team learned about this new and popular game catching the attention of state officials.

Bar bingo, a successful new game that boosts bar revenue, draws customers to taverns. But the I-Team learned it's being met with scrutiny by the state agency that oversees taxes and gaming, which means it could be game over for some cashing in.

Bar bingo has become a popular attraction at taverns in Illinois. It's free to play and customers can win prizes. One jackpot reached $10,000, the I-Team learned.

There are a few types of bingo in Illinois: gaming bingo, which requires a license; charitable bingo; and bar bingo, which currently does not require a gaming license.

Bar bingo has different rules. "You are never going to pay to play and we are not going to require you to make a purchase," said Ron Larson, CEO of FreeN'Fun Bar Bingo.

FreeN'Fun Bar Bingo, based in Crestwood, is the biggest bar bingo company in Illinois. Its website maps the nearly 250 tavern locations where their game is offered. The company displays drawn bingo numbers on a TV screen, and their grand prize is generated by the fees that bars pay to host the game.

"Our services are important to the state of Illinois. They notice a considerable increase in their gaming on nights that there is bingo because bingo players like to play the gaming machines," said Larson.

But the Illinois Department of Revenue received complains that bar bingo isn't following the state tax and gaming laws. The ABC7 I-Team learned the department is looking into all companies and establishments associated with the game and are "reviewing the laws that relate to bar bingo and pull tab games."

That's because licensed bingo is defined as "a game in which each player has a card or board for which consideration has been paid." The state told the I-Team that applied to anyone who pays for the card or the board. Even though patrons don't pay in unlicensed bar bingo, the bar or company may be paying, and that could be a violation.

"We are very careful that we run a clean operation," said Larson.

FreeN'Fun said it conducts business under Illinois law as a sweepstakes game, not bingo and that the Illinois Gaming Board investigated the company for two months in 2015 and concluded they were operating within the law.

But the I-Team was told by the police chief of a northern suburb that they are investigating whether bar bingo falls under their village gaming laws.