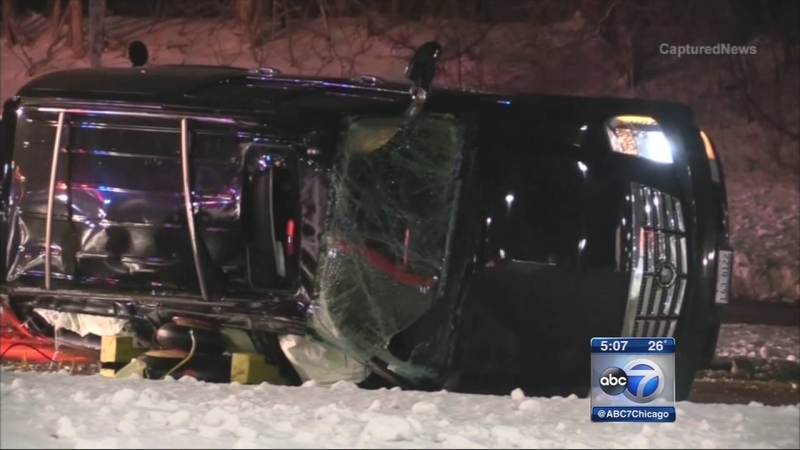 Emergency crews from Bartlett, Streamwood, Elgin and Barrington responded to the crash on U.S. 20 (Lake Street) near Naperville Road around 12:40 a.m. Thursday.

Investigators said a black 2009 Cadillac Escalade traveling west on U.S. 20 in the left lane struck a median, lost control, hit a snow embankment on the north side of the road and rolled onto its passenger side.

Bartlett police said a total of seven people were in the Escalade.

Bartlett police and the Streamwood Fire Department said two passengers - 81-year-old Fardous Sultana of Bartlett and a 16-year-old boy - were ejected from the Cadillac. Firefighters say the 16-year-old victim was pinned under the Escalade from the chest down. Firefighters used airbags to lift the vehicle and free the victim.

Police said Sultana was rushed to St. Alexius Medical Center in Hoffman Estates, where she later died. The 16-year-old boy was also transported to St. Alexius before he was airlifted to Lutheran General Hospital in Park Ridge.

The 52-year-old driver and four other passengers were also hurt, but their injuries were not life-threatening. They were taken to Presence Saint Joseph Medical Center in Elgin, police said.

Investigators are looking into what caused the crash. Police say there is no evidence that the driver was impaired with either drugs or alcohol.

Anyone with information pertinent to the investigation should call Bartlett police at (630) 837-0846.