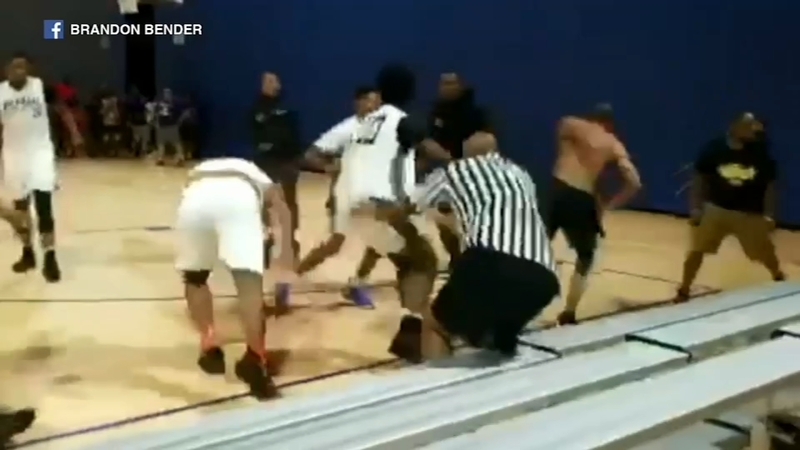 Players on a Chicago-based travel basketball team were involved in a fight with referees during an Amateur Athletic Union basketball game in an Atlanta suburb.

The altercation on Sunday was captured on video, but witnesses have given conflicting accounts of what happened during a AAU semi-final game between R.A.W. Athletics and the Houston Raptors at the LakePoint sports facility in Emerson.

"I don't agree with the player going and shoulder-bumping the official," Benjamin said.

A video shows players and referees trading punches at a basketball game near Atlanta. The head coach of Chicago-based R.A.W. Athletics defended his players, saying the video doesn'

However, R.A.W. Athletics coach Howard Martin defended his players, saying the video doesn't tell the whole story. The video was posted on social media and shared thousands of times.

"The story that is out there is incorrect," Martin said in a phone interview.

Coach Richard Martin -- director of another team in the tourney, the Chicago Storm -- watched the fight from the bleachers. He said he witnessed the whole incident and agreed with the R.A.W. Athletics coach's account that the referee pushed first.

Martin said he did not condone the violence and "chaos" that resulted but believes the referees could have diffused the situation before it got that far.

"The referees were extremely unprofessional," Martin said. "They were really unprofessional. That situation would have never escalated to that degree if the referee had taken proper protocol."

The R.A.W Athletics team was disqualified from the tournament.

The athletic center in Georgia that hosted the tournament released a statement Sunday on Twitter saying, "We are disappointed in the incident that occurred this morning at The Association basketball tournament at @LakePointIndoor and are taking the appropriate action with authorities. Behavior like this by any party will not be tolerated."

While the tournament has been described as an AAU event, a spokesperson for the Amateur Athletic Union said it was not a sanctioned event.

"The Lakepoint basketball tournament (where the widely reported on-court incident occurred) was not a licensed event by AAU - and therefore not an AAU event (and should not be referenced as such)," the AAU spokesperson said in a statement.