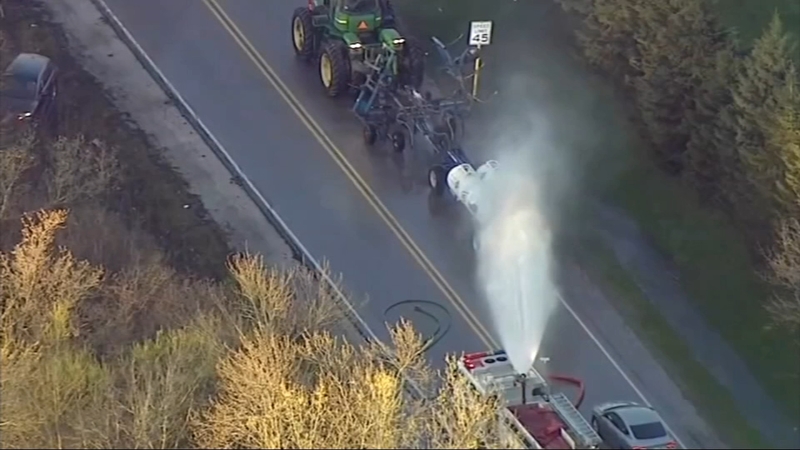 A tractor was towing two, two-ton containers of anhydrous ammonia near 29th Street and Green Bay Road when one of the containers leaked and created a chemical cloud.

Hospitals in the northern suburbs are treating dozens who have been injured after a chemical spill in Beach Park.

The spill prompted a level 5 HazMat response for ambulances. People within a one-mile radius were ordered to stay inside with their windows closed and to turn off HVAC units. The shelter-in-place order was lifted shortly after 10 a.m.

Several victims in the vicinity of the leak were rescued as a total of 140 first responders came to the scene.

"Hazmat and first responders did a phenomenal job mitigating these toxic plumes of smoke as best as they could by spraying large amounts of water on them to bring them down back to the soil versus them going airborne into the air," Covelli said.

Among the 40 victims were the Lake County deputy and sergeant and a Zion police officer, and 11 firefighters. Seven of those transported to local hospitals, including a firefighter, were in critical condition.

Eight victims were taken to Condell Hospital in Libertyville for treatment. Seven of them have been discharged.

Veda Reed was on her way to work when she drove right into the spill and stopped to call 911.

"I could hardly see because the smoke or the gas was just overtaking, and it was, like, breath-taking," Reed said. "I couldn't catch my breath."

"What had happened is patients that inhaled the chemicals had significant swelling to the vocal cords and their upper airways, such that we needed to intervene with mechanical ventilation," Oyasu said.

Authorities provide and update on the chemical spill in Beach Park.

Gloria Pruitt joined the growing number of concerned after learning her son Javon Roy was among those sickened.

"He's a hard, strong worker and I want my baby back," Pruitt said.

The 27-year-old Waukegan native remained in the ICU in critical condition as of Thursday night, and is breathing with the help of a respirator.

"We're just hoping for the best for all the people affected by this," Roy's aunt Roslyn Finch.

Family and friends of the victims react after the incident.

Investigators are looking into what the tractor was doing on the road and if proper agricultural laws were followed. Anhydrous ammonia is a chemical used as an agricultural fertilizer. The substance can expand rapidly forming a large cloud that can cause difficulty breathing even death.

Antonio Ellis said two of his relatives who live in the North Suburban Village - just four blocks from where the spill happened - were rushed to safety ambulance after both were overcome by the toxic fumes.

Police are telling residents if they are experiencing respiratory problems to call 911. Firefighters went door-to-door to check on residents.

"They're going door to door. Knocking on doors trying to make contact with those in the immediately affected area to find out are the occupants inside those homes: Are they okay? Were they affected by the gas?" Covelli said.

"The leak is stopped the issue is the plume of gas now," Gallo said. "The liquid leaks are solid those are easier to contain...this is harder. It's something that's airborne."

Resident and mom, Rachel Seleman, packed up her daughter and their family pets after smelling the chemical.

"I just decided with it being that close I just took three dogs, two cats, a rabbit, a kid and we left. What if it got worse?," Seleman said.

Due to a chemical spill that happened recently, All Beach Park School District #3 schools will be closed today, April 25th, for the safety or our students and staff. We apologize for any inconvenience that may have on your family.

The Lake County Sheriff's Department is taking the lead on the investigation but they're getting help from some federal agencies. The National Traffic Safety Board is sending four investigators.